Today’s ride certainly counts as one of the best in the twenty years I’ve been riding. The Blue Ridge Parkway was stunning. Most of the sections in Virginia were like a slice out of history, as if I was traveling through the nineteenth century on one of those Disney World rides. The landscape was idyllic, old farmhouses, farmlands, rough wooden fences, and not a single item to remind me I was in the twenty-first century. Occasionally, I would pass another car or motorcycle, but it was as if I had rented the entire parkway for my solo ride. I could not have asked for a better day, and I earned it. 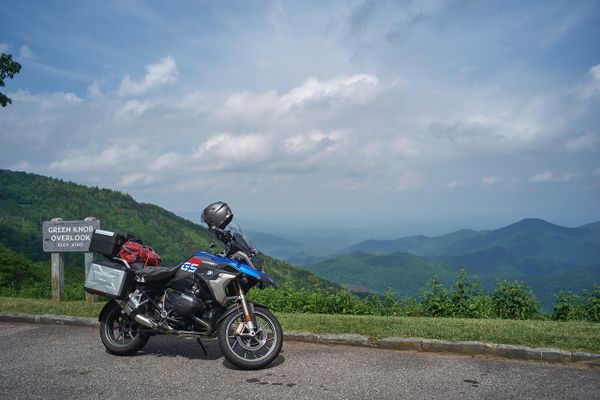 Not all was perfect: sections of the parkway were closed, so I was required to detour twice, and I even had to delay entering for about forty miles south-west of Roanoke. At one point, I went too far out of my way in the wrong direction looking for gas, but these were minor inconveniences in an otherwise sublime day of riding. Even the traffic was very light until I got close to Asheville.

The temperature never got above 78°F or so the whole day. The road mostly meandered through the mountains, like a lazy python, and I practiced my turning techniques. As the day progressed, I became more confident and got a bit more aggressive in the turns. Mostly, I set the cruise control to about 55 and leaned into the corners, using as much of the tires as I could. At one point, I caught up to a group of three riders led by a dude on another GS, and I keep up with them so well, the tail guy motioned me to pass. I felt good. I was even keeping up well with this guy on an older RT. Interestingly, aggressive riding is not as fatiguing as slow riding. Maybe I would have been OK yesterday taking the Blue Ridge; maybe the monotony of the interstate just exhausts me quicker.

I was concerned about the 250 miles today, but it was awesome. No problem. When I finally stopped south of Asheville, I was tired, but I felt accomplished. It’s days like this that keep me a motorcyclist. Now, I have to pick up those parts of the Blue Ridge I missed. I wonder if I’ll get the chance?