A Long Drive, then Pizza!

Yes! We had two local pizzas tonight: Marion’s Piazza and Gionino’s. The former is a thin crust pie cut in squares, pepperoni only. The latter is also thin, but more traditional as Lisced ordered it with vegis—and it was loaded. I think this detracted a bit from the pizza—a lot of raw vegis on pizza is not my thing, but it was still good. Gionino’s sauce was a bit sweeter, more like LaRosa’s. Dad recommended Cassano’s which we’ll probably try tomorrow, maybe up against LaRosa’s. So far, Dayton is a pretty good pizza town. I have to say that Marion’s is my current favorite. Alas, I have no photos as it was late, and I was hangry by this point. 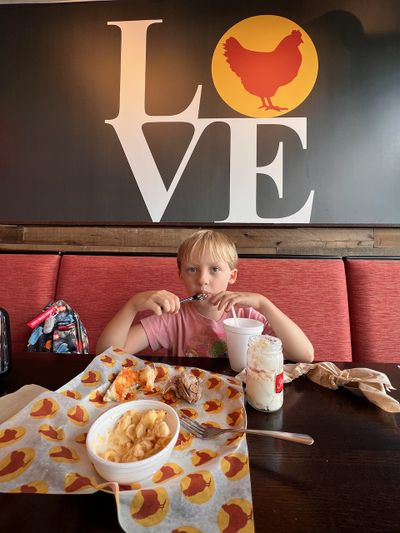 We got a late start this morning, but managed to get on the road before 11. Autumn had promised Henry a bit of time on the local playground, so that delayed us a bit more. Dayton is 5.5 hours away, but I knew it would take longer. We stopped for bathroom breaks a couple of times and had lunch at a place I have been meaning to try for a while: Joella’s Hot Chicken. I thought they were an Atlanta restaurant, but here was one in Lexington. Fortunately, we just happened upon it as it was right next to Total Wine where we acquired a case of Lagunita’s Hoppy Refresher. Score! Anyway, the chicken was excellent! I had a couple of hot tenders and garlic parmesan fries. I think all three of us cleaned our plates. Not the healthiest lunch, but, hey! we’re on vacation. Oh, even the Strawberry Shortcake in a jar was good.

Driving through Cincinnati was a mess, but we made it to Dayton at about 18:00 before the rain started. Henry and I chilled at the AirBnB while Autumn, Spencer, and Lisced went to the store and picked up the ’za. They were caught in a pretty bad storm, but we finally got our pizza about 21:30. It was worth the trouble and wait.

Tomorrow we see more of Dayton and definitely get some Skyline. Spencer promised to take me to a famous bourbon bar that sounds comparable to Jack Rose’s in DC. We’ll see. We visit Mom on Sunday. It should be an interesting weekend. We’ll probably see some fireworks on Monday, though I’m not sure our country deserves a celebration right now.