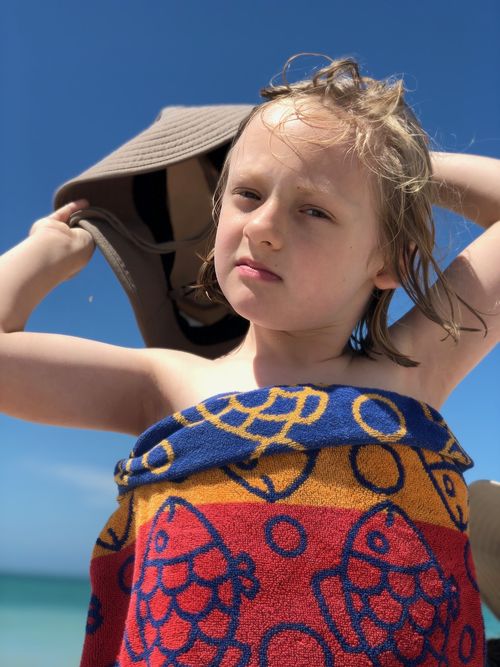 Henry drying off. Taken with my iPhone X.

We’ve been in Florida for a day, and the weather is beautiful. Henry wanted to go to the beach, first-thing, so we spent most of the day on Gasparilla Island by the lighthouse. I thought the gulf was pretty cold, but Henry dove right in and spent most of the time swimming. The kid loves the beach. Last night we made pizza and played video games on our new Recalbox. When Henry went to bed, Autumn and I watched the first episode of Nice Perfect Strangers on the portable Plex server I made for the trip. So far, we’ve had a good time.

The Recalbox was very easy to install on a spare Raspberry Pi I had sitting around. Looking for ROMs was fun; I think I found a few that Henry likes, though he’s having a good time exploring all those that came with Recalbox. I purchased an 8BitDo SN30 Pro controller, and with a bit of help, managed to get it working via Bluetooth. Some of the games require BIOSes, too, and I can’t seem to get very good explanations about were to find them and how to use them. I guess this is legally dubious, so straightup tutorials are rare. Still, most of what I intended to run actually does.

I used to play video games in the ’80s, but I haven’t really had time since. Yet, I did get some classic ROMs for some I used to enjoy, like Joust, Donkey Kong, and PacMan. Henry seems to be gravitating to the later console stuff, like Sonic and Super Mario. I may have to build him a portable unit at some point.

My Plex server was also pretty easy to set up. I used the Raspberry Pi 4 (4GB RAM) in the Argon case which sports a 250GB M2 drive. I put the 64-bit PiOS on it, and set it up to boot from the M2 drive. I added docker and installed the Plex server. After having a bit of difficulty connecting to the server part of Plex (I was using the machine name, rogue.local, rather than the IP address; the latter must be used for some reason), I was able to set up a small server. I copied some TV and movies for the trip. Once I was here, it was very simple to run the Plex client in the Apple TV and connect to the server. How cool is that?

Today should be chill, I hope. Henry’s already up and playing with the Recalbox—why not? I’m going exercise shortly and hopefully we’ll just hang out at the pool. I predict a sunset in our future, too. Tomorrow, I venture to Oldsmar to hang out with Tom.