OK, how did I miss this? Love, Death & Robots is a fantastic science fiction series that I knew about, but for some reason, never watched. Somewhere in the back of my mind, I knew that the third installment had recently been released, so poking around for something short to watch the other night, I happened upon it. Short turned into watching half of the first season. The concept is great: animated versions of short stories, ranging from 5 to 20 minutes, adapted by various animation studios to match the style of the narrative. Where was this when I was teaching my short-form science fiction course? 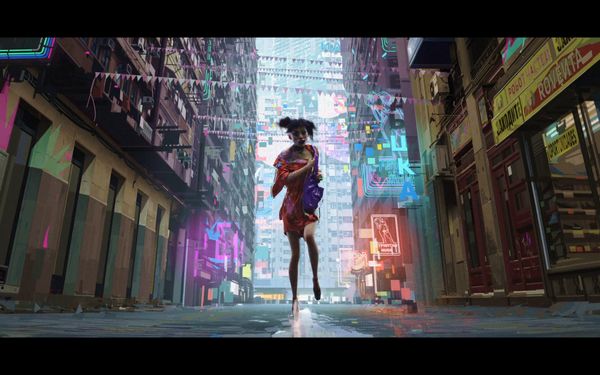 Using a hyper-stylized animation style, “The Witness” is an extended chase through a cyberpunk Hong Kong. A woman getting ready for work witnesses, Rear-Window-like, what appears to be a man committing a murder in the next building; she panics, and the chase begins through the streets of Hong Kong, to a sex dungeon, and circling back to where it began. Only this time, the man lies dead, the woman holding the gun, now witnessed by the man she just killed in the next building. The idea seems to be that they are caught in some sort of chase-murder time loop, switching between murdered and murderer, as if they are both being punished in some sort of cyberpunk hellscape for some unknown transgressions.

In fact, this is the interpretation of Paul from Heavy Spoilers, and it seems logical, supported by the hell-like atmosphere and the lack of people on the streets to help. However, to me it seems like an allegory for what the dance of intercourse has become in the age of digital mediation. Yes, the hell imagery is present, especially in the sex dungeon (what else could you call it?) where the majordomo demon-like oversees and encourages the debauchery where the protagonist is the main attraction. In fact, this is where she runs initially when the chase begins, hoping that her boss or sex-shop heavy Vladimir might provide some protection. Yet, she goes right to work, as if the sex show takes precedence over everything else; even her pursuer is sucked in, in a manner of speaking, and is led to a couch between two latex-clad succubi who immediately start to work on him while the protagonist begins her writhing striptease on a couch just feet away. Everything is just so over-the-top, and the whole dirty and stylized scene takes on this prurient feel like a drug, until she notices that her pursuer is being entertained by her and right in front of her, and the chase begins again. 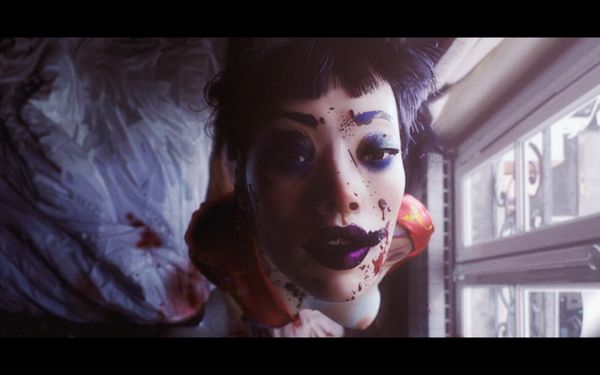 Vladimir is naked and passed out, predictably, so she locates a gun in his office-cum-sex-shop among the drawers of dildos and drugs, which she tucks into her bag. There’s nowhere else to put it, as she just grabs a robe to put over her tattooed and painted body, and she starts running basically naked through the streets as the man chases here like a terminator. Yes, the sex-show titillation continues, as glimpses of her nude form mixed with fear and adrenaline race through the dirty streets, eventually returning to where the story begins, but in the apartment where the killing took place. Interestingly, they both find their way there, as if some force has programmed them. A struggle commences off-screen, while the gun is fired multiple times. Finally, the camera shows a blood-splattered room, where the man is dead and the protagonist stands above him. Briefly, she looks up into the camera, almost as if this is not a murder scene, but the climax of intercourse, like a moment of afterglow. Interestingly, this mirrors the same shot of the man from the start of the episode.

“The Witness” links the violence of murder with that of the disassociation of sex in the Internet age. No longer a tender act of love, sex has become a dance of hyperviolence, aggression, and dominance shared by men and women alike. Maybe this is the new romanticism of the digital world? Indeed, this episode gives new meaning to la petite mort. “The Witness” is brutal, yes, but beautiful. I feel a bit dirty for admitting that, but perhaps that’s the idea. Contemporary conceptions of sex as depicted through the windows of our computers are hell, the episode seems to suggest, and only lead us to entertain our baser natures, alternatively dominant and submissive, in the dance of hypersexuality. And, they are very difficult to resist. 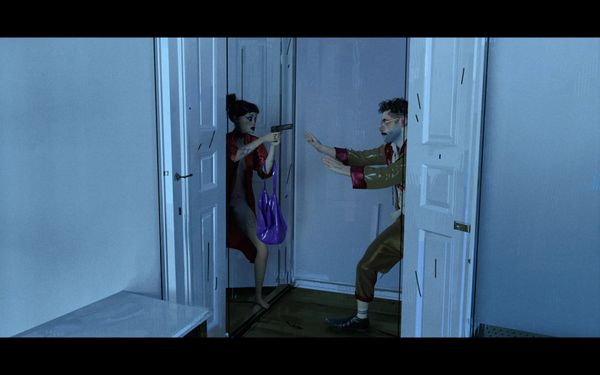 Indeed, the fear felt by the protagonist does not allow her to hear what the antagonist has to say. It seems as if he has some insight into what’s happening, as he repeatedly tries to get her to listen, but his aggressive and relentless stance only intimidates her and stimulates her flight response. The fact that every inch of his body is clothed contrasts with the woman’s nudity shows at least one level of inequality and emphasizing her vulnerability. Maybe this gives some insight into how many women see men today: even if they are trying to be reasonable, their masculine behaviors belie a more threatening posture or malevolence. The way the narrative centers around the woman makes the viewer sympathize with her, and I could only feel the man as a threat, even though his appearance was innocuous and he sounded reasonable. In fact, he looks a bit like my dead friend David. Again, maybe this access to everything offered by the Internet and our ubiquitous mobile devices ironically only deliver an inability to communicate; since we are now privy to the proof of the most disgusting aspects of humanity, we can only view the world and others as potentially hostile, threatening, and nefarious. Maybe our connected world has an atavistic affect, allowing us to watch a viciousness that used to be hidden, endowing it with a new reality that scares the shit out of everyone? How much of our current political climate is driven solely by fear of the other? So much so, the threat becomes expected, even pursued, relished.

OK, so the story was predictable. I knew from the outset where it would end up, but the style of the episode is the triumph here. I want to see more from Alberto Mielgo.