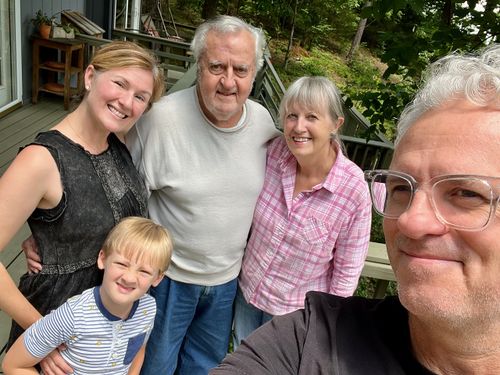 Today, we spent some time with Dad and Sharon. We’re on our way to Dayton, OH, for a planned trip—I was supposed to ride while Autumn and Henry drove with Autumn’s parents, but that fell through because of Robert’s knee surgery—so we made a detour to spend the night in Pigeon Forge. I’m glad we did. As we all are getting older, spending time becomes more important and elusive, it seems. We couldn’t stay too long, but sharing some meals and a few stories seemed just about right.

We drove to Dillsboro, GA, last night and stayed at a Best Western on the Tuckasegee River. We arrived fairly late, so we checked in and rushed over to Innovation Brewing for a pint and some tacos from the Chili Chomper II food truck. We were lucky to have gotten the latter since he was in the middle of closing down for the evening, and we enjoyed sitting outside sipping our beers, munching on our tacos, and relaxing. The hotel was fine, albeit a bit old. We got an early-ish start this morning and were in Pigeon Forge for lunch.

Later, we took Henry for his first mini-golf experience before bringing in dinner from Calhoun’s. We just chatted after dinner like you do in the mountains. Tomorrow, we’re on to Ohio.