As much as I didn’t want to be: I was impressed by the Tesla Model Y. Really impressed. I like just about everything: the styling, the ride, and tech especially. Tim did not offer to let me drive it—he said he didn’t want my first experience to be on the highway—so I need to do that at some point. I even liked the whole travel-charging experience. I think I would wear my walking shoes and try to get in a walk or two during charges, but to have those built-in to the trip is not just necessary—it gives another level of structure to travel. Knowing that I have to stop in 60 miles for twenty minutes (both arbitrary figures here, as charge times ranged from ten to forty minutes) allows for a greater degree of organization and planning. In other words: instead of being annoying and inconvenient, they were a welcome addition to the whole road-trip experience. In fact, it makes car travel more like motorcycle travel in this regard. 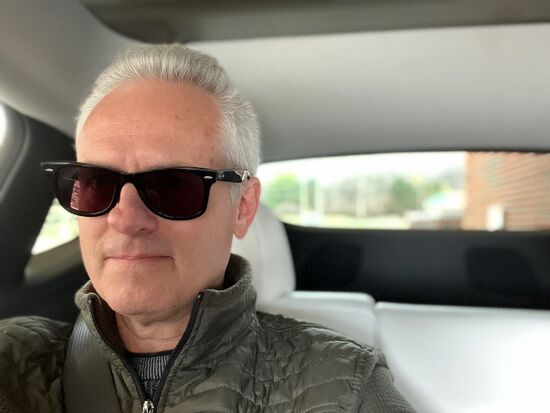 The back seat was roomy, but the ride was a bit harsh. I suspect it was because of the 20" rims and lower-profile tires.

There are some refinements that should be made to the car, but these are really knit-picky. In fact, established cars by major manufacturers like my current Accord have more quirks than I saw with the Tesla. I even like the central big screen. While Apple Music was not an option (Tim tells me that the current update from Tesla will add this—seems years late to me), Spotify worked great. Sometimes using the screen controls were tricky to use during travel, like adjusting the passenger temperature or the seat heater, that’s really a minor quibble. In all, I truly enjoyed. my first experience with Tesla.

Now I have to decide if I want one.[1] I cannot afford a new one, so it will have to be used. Nor will I be able to lease a used car, so I must purchase. I’m less worried about these facts with Tesla than I am with any established car company since (1) electric cars will likely last longer with less maintenance, and (2) regular software updates will improve the experience, like my other tech. My current lease ends in May of 2024, so I have until then to truly decide what I want to do. One thing is clear: I’m definitely going electric. Maybe a Model 3 would be the best choice for me. Time to start looking into it?