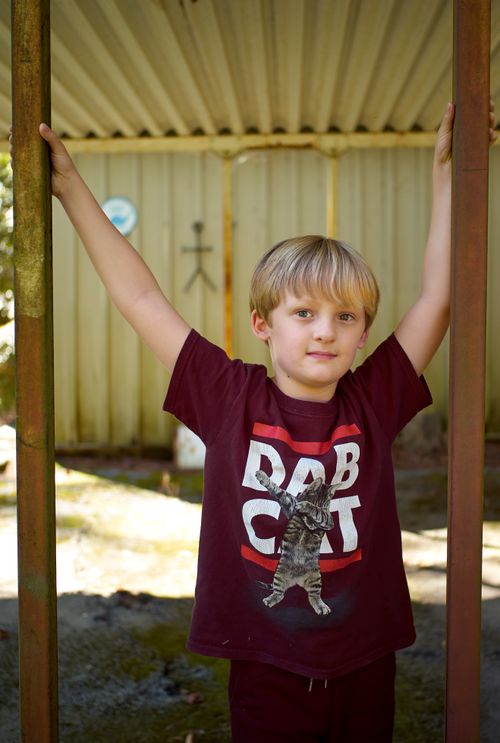 I lucked out and Henry was in the mood for photos. He had his cool Dab Cat shirt on when I picked him up from school, so I used that as a selling point: “Dude, let’s take a couple of photos of you in your cool Dab Cat shirt.” “OK,” and there we were.

This one might be my favorite out of the seven or eight I took. The rest are in the Leica M8 Test gallery wherein I also included some flower photos. I really like the color rendering on the Leica M8, even without the IR cut filter. That said, I will probably pick one of those up to see what kind of difference it makes. His shirt looks a bit purple, when I see it as black, so this is likely a consequence of not using the filter. Here, it doesn’t bother me.

As an experiment, I put the Ultron 1.8/21 and the Canon 1.4/50 LTM on the M8. Both worked with the rangefinder, as expected, but the former blocked quite a bit of the sensor, and the latter just felt a bit too long. Since a 21mm is about a 28mm equivalent and a 40mm is a 52mm equivalent, I might pick up a Voightländer Color-Skopar 3.5/21 and repurchase a Nokton Classic 1.4/40 to round out the lens selection for this camera. They are both about the same size as the Ultron 2/28, and the Skopar is also a part of the Vintage line. Some of my favorite photos were taken with this diminutive Nokton, and I regret selling it.[1] However, instead of the Nokton, I could get a Summicron 2/40, but it’s about twice the price, and I might want to stick with vintage-style lenses for this camera. The 40 Summicron is pretty close to the 35, and I already have one of those. Still, any—or all!— of these lenses would be great on this camera.