Giles and I headed out about 09:00. I hadn’t had the BMW R 1200 GS out for a lengthy ride since the Sunday we went to Trader Joe’s. While we didn’t have a specific plan, the weather was mild for August, so we decided to take advantage. We had many options, but decided to head for Americus and Andersonville. As we headed south while it was still 75°, I remembered that it has been almost 19 years since he and I took a similar ride. 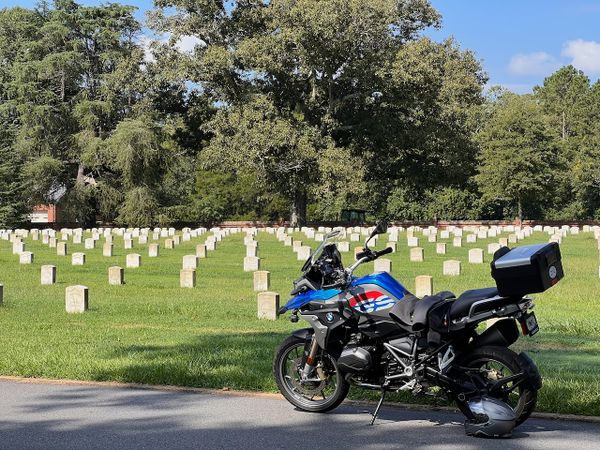 We stopped at the Andersonville historic site for a breather and to take a photo or two. I used the SL for a bit, but just defaulted to the iPhone, since it does such a great job. Mike Lennon called, so I sat in the shade and chatted with him for a bit about our excerpt of Lipton’s Journal coming out this week (more on that later). We soon headed into Americus to grab some lunch, but I had forgotten that only chain restaurants are open on Sunday outside of Georgia’s larger cities, so we just kept riding.

We headed northeast out of Americus, Giles taking the lead. We took GA-30 to Buena Vista, which seems to have been misnamed, then GA-137 up to Butler which had a lot more of nothing. We decided just to head back to Macon for a late lunch. Parts of 137 were hilly and curvy, but mostly it was a fairly straight road which always fatigues me. By the time we hit Roberta, I was tired, so I didn’t suggest the lovely GA-42 into Byron. We just took 80 into Macon. Since we were back, I just fetched my car to meet Giles downtown for lunch.

In all, a nice Sunday ride. It allowed me to clear my head for this coming week: the first full one of the semester.