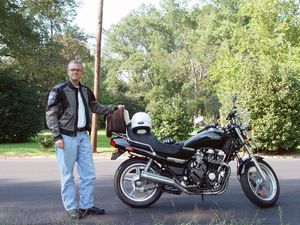 Over the weekend, Giles and I drove around some of the Georgia sites near Macon. Our first stop, after a rest to recover from Saturday night’s imbibing, we headed, Giles in Passat and I on my Nighthawk, down Highway 49 toward Andersonville National Historic Site and Cemetery. 49 was fabulous: straight roads through farmland and colorful blurs of flowers left over from the summer. These roads just scream for speed, and Giles and I took advantage of the dearth of traffic to do just that. The air hinted fall as we sped south about an hour to Andersonville.

The historic cemetery, our first stop, inspired an awe that silenced us as we walked among the dead of the American Civil War and World War I. More than 13,000 soldiers and some of their wives are buried here, and the day’s promise of fall made the place quietly beautiful. I looked for any soldiers that might have shared my name, but reading each stone began to hypnotize me after a while: perhaps a testament to the staggering amount of dead here and the fact that we all will meet such an end. Yet, these men died in horror; hopefully, we will be spared the atrocities that they suffered here. 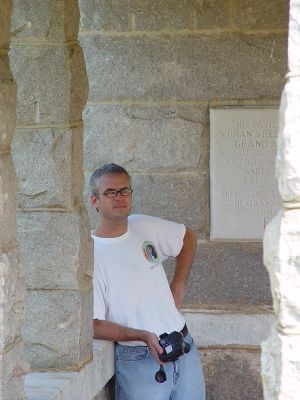 The site of the prison was equally numbing; the beautiful day and verdant landscaping provided a stark contrast, like listening to "Wouldn’t It Be Nice" at a funeral. Giles and I spent another hour here poking through the subdued horror, before heading north again to Macon.

On the way back, the car just ahead for Giles almost smacked a deer that decided it needed to cross the highway at the instant. Just ten seconds later, and it could have ran into my bike. I was a bit paranoid for the rest of the ride, scanning the foliage to either side of the road, right hand ready to grip the brake at a second’s notice. We saw no more deer, but we did see some unidentifiable roadkill shortly after the near-deer hit. Gotta be careful.

That night was more imbibing with Dan and Monica. The next morning needed more convalescence, though I don’t think I ever did get over it. We rode to Gray, Milledgeville, Monticello, then back to Macon on Monday. Milledgeville houses Georgia College and State University; it’s a small college town similar to Gainesville and Athens. Monticello sits atop the Oconee National Forest, and we had an espresso there after capturing some images of the town square. Sundown had us photographing the houses on College Street in downtown Macon.

All in all, a good time. Thanks, again, Giles. Come any time. Why haven’t any of my other friends visited me (R and K excluded)? Let me tell you about Macon . . .