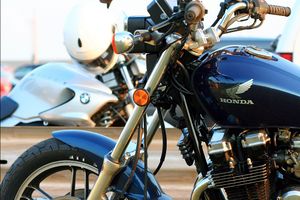 With just over 3400 miles, my new 2002 Honda CB750 “Nighthawk” sparkled in the parking lot as I arrived at ValuCycle yesterday afternoon for delivery. After a short ride to make sure it was acceptable, I signed the check and was on my way. In fact, the short mile ride was enough to convince me that I hadn’t, in fact, ridden a real motorcycle until that afternoon. I’m not saying that the 1978 BMW R80/7 is not a real motorcycle, but the Honda purrs like a Porsche while the BMW putters like an old VW Beetle. Those of you who know me know that I have a fondness for old Beetles, but who wouldn’t rather drive a Porsche? Really?

After a quick lunch, I headed east on I-20 and exited at state road 11 for my journey back to Macon. Now the Nighthawk does not have a windshield (yet), so driving 80 is a bit fatiguing; however, my ride south on 11 was much more leisurely. The Honda’s smooth operation inspires confidence. I was able to take turns with more accelerated lean, able to stop faster and more accurately with more reliable brakes (an important feature), and go from 0 to 60 in a matter of seconds. Have I mentioned what a pleasure this motorcycle is to drive? Even the countryside looked greener and more lush. 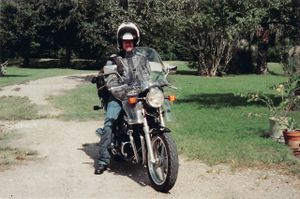 GA-11 presented farmland, the quaint towns of Monticello and Gray, the thick and cool Occonee National Forest, and lots of curvy turns. Even through the treat of rain at any moment—a typical summer feature of central Georgia—I made good time winding through back roads like the west wind through leaves. I made it to Gray in about an hour-and-a-half (80 miles or so), and took a back way home to avoid the Macon rush hour (ha-ha). A cold Stella was the perfect end to the first 102 miles on my new Honda. What a great afternoon.

Today, the sky portended rain, but I rode anyway. First for a long-overdue visit to Barnes and Noble to finish a letter, read some poetry by Elizabeth Bishop, and peruse the latest issue of Rider (the only bike magazine as far as I’m concerned—they discuss riding without scantly clad women rubbing on Harleys), then I went into the office to do some work—remember that? I rode home under a golden-red setting sun. I have college stuff tomorrow and part of Thursday, but that afternoon I plan to go somewhere. Maybe to Dad’s; maybe to Mobile. School starts Tuesday, so I need to do something before then. Maybe I’ll see where the winds take me.