Some Notes on Naturalism

Since my English Composition classes are in the middle of studying London’s “To Build a Fire,” I thought I would post some notes on literary Naturalism. 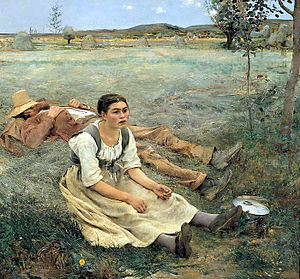 A basic tension between head and heart was characteristic of naturalistic novelists. Their intellectual commitment to scientific determinism and its attendant implications regarding humanity’s place in nature is to be seen in the forms of their works—in explicit and implicit commentary, in character conception, in the use of background, in the dynamics of interaction between character and environment (the conduct of action), and in motif, image, and symbol. Their attempt to render the new deterministic vision in the novel form constitutes what we may call their positive naturalism. Inevitably, such an effort issues in what has been called negative naturalism, an attack on false values based on non-scientific assumptions. This effect, however, is not simply a quiet or implied corollary of their positive naturalism. Indeed, in many cases the novelists seem at least as interested in toppling the intellectual idols of their fathers as they are in embodying their own bleak new knowledge.

The main objects of their iconoclasm are rational humanism, Christianity, romanticism, the “genteel tradition” (ideality, sentimentalism, respectability, gentility, etc.), the assurances of the editorial pages and the pulpit, and the various components of the American dream. Sometimes the work of denial is conducted sadly, sometimes dispassionately, sometimes with an épater le bourgeois avidity, and sometimes with trenchant irony. But even as they discredit “outmoded” formulas for viewing life in humanly meaningful terms, it is clear that they have not purged their own hearts of that need. In spite of their determinism, as Malcolm Cowley has put it, “The sense of moral fitness is strong in them; they believe in their hearts that nature should be kind, that virtue should be rewarded on earth, that men should control their own destinies.” Both within the forms of their novels and in their effects, the reader discovers a residual humanistic and teleological sensibility at work.

“The Dynamo and the Virgin”—The sublimation of the sexual energy in the form of the Virgin was the power of spirituality in the Middle Ages. This has been superseded with the invention of the Dynamo which Adams sees as representing an amoral force with no laws of cause and effect; a fragmented multiverse with no spirituality. This force has become an end in itself—a potentially destructive force that could easily overwhelm its creators.

The projection of romantic ideals into a naturalistic, indifferent universe is destructive. There is no morality or beauty in this universe ruled, as Henry Adams sees it, by the chaotic, destructive power of the Dynamo, rather than the loving power of the Virgin.

The desire for nature to be benevolent and kind, rewarding the righteous, freedom of choice, and the power to control our own destiny, is still alive, and part of naturalism. The various authors acknowledge the fact of an amoral, indifferent universe, yet lament that it must be so. This view is sometimes represented a the contention between head and heart. The head realizes that the universe is monistic, i.e. of one substance, the physical precluding the spiritual as delusional; the heart pines that it should not be so. If the balance fails and leans toward the desires of the heart then man projects upon the universe what he needs out of it, e.g. anthropomorphic qualities, the control by an almighty God, who is perhaps, like the Deists believed, removed from influence and entreaty, or teleology.

Yet Darwin destroyed any Deist arguments of design with benevolence. He looked for, and discovered, the mechanism of evolution. Struggle for existence, the survival of the fittest, was the only law of the universe; this is the amoral law of variation.

Comtis, in his law of the three stages of human thought, traces the development of the human mind:

All move through these phases with sociology being the last. Eventually, through these laws, including Darwinism, a perfection will be reached where only the strongest and most perfect will comprise humanity.

Spencer, similar to Comtis, attributed the development of everything by the universe’s force moving perpetually and persistently through everything. These forces will both culminate in the winnowing out of the weaker, lesser beings in a society. This idea led to Social Darwinism.

Yet, there is a link with the past—always. Humans are the sum of their animal pasts. The primal, animalistic instinct is still lurking within ready to be unleashed with any chance change of circumstances, or milieu. Anyone, at any time, can atavistically relapse into her/his constituent bestial elements.

There is a chance for escape in the reader. The authors of these naturalistic works are depending upon the readers understanding and action to change the circumstances presented by them in their novels. We, the readers, have a weighty responsibility in seeing that there are no more Maggies, Trinas, or McTeagues. Like the scientist, the naturalistic novelist points out the natural laws underlying events so that we will be able to understand them and eventually control them, to some extent, and improve our lives.