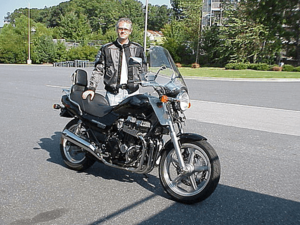 You’d think, knowing me, that I would not be as chipper at 4:00 am. But somehow knowing that I would soon be on the Nighthawk speeding northward in this hint of a fall morning provided what an alarm clock couldn’t any other day. Since I needed to be in Roswell (thirty miles north of Atlanta) by 7:15, I wanted to leave in plenty of time to enjoy the early morning ride, marvel at the infrequently seen sunrise, and make it to Starbuck’s in time for a sugared dark roast. 7:15 marked the starting time of my second course with Atlanta Motorcycle Schools, and since I had to teach the previous evening, I decided to ride up in the morning on I-75. It was the start of a memorable day.

After my Starbuck’s, I met Ken and JoAnna at Killer Creek Harley Davidson to begin my class under a bright sun and a cool breeze. Like the 101 course, I was expecting a couple of students, but I was the only one. Cool. They checked out the Nighthawk and only had compliments on my choice. We chatted a bit more before beginning. I got used to the area again by riding around the lot, doing turns and breaking, just so my instructors could see what areas I need work on. It seems I was doing most things correctly, except for my breaking: I needed to do it earlier approaching a curve so that I could be completely off the breaks by the time I entered the turn. Easily fixed. Then we were on to the more challenging exercises.

The whole morning was a challenge. We practiced riding slow through uneven obstacles, quick braking, quick swerving, narrow and sharp turns, sharp turns from a stop, and essentially skills at a low speed. I learned how to ride very slowly in congested areas—foot on the rear break, throttle open, and clutch right at the gripping point—and by the time the class was finished I had learned how to put the bike on its center stand. I felt foolish as this was much easier than it first seemed. No wonder I was never good at physics.

I left feeling like I had many skills to practice, something that never goes away according to JoAnna. I believe that my weakest area was the quick stop: you have to touch the back break to transfer weight to the front, then apply gradual pressure to the front break so as to not lock up the front tire in a skid. Coordinating my foot and hand and clutch is much more difficult than it might seem; I stalled the bike a couple of times forgetting the clutch completely while concentrating on the breaking. I often felt stupid, but Ken and JoAnna are patient, and they encouraged me at every step, even if I did something way wrong. I left feeling good and ready to tackle the 301 class in October, but first I would have to have the bike serviced—new break lines and fluid and perhaps new tires.

After a lunch of Indian food with Tabatha, I head home already feeling tired. I was distracted by fatigue as I headed down I-75, but managed to make it home in one piece. I had accomplished quite a bit of riding today. Thanks again to Ken and JoAnna for their professional and friendly expertise: worth the 4 am wake up call.