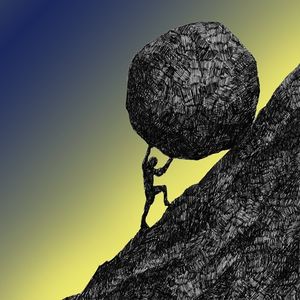 Sisyphus, legendary founder of our fair city and lover of Anticleia, was condemed to eternal life rolling a stone up the hill in the realm of Hades. He accused Zeus, well known father of the gods, of abducting Aegina, vacationing daughter of the river-god Asopus. The god of the heaven and the earth denied the allegations: “Aegina Who? No! Ridiculous! Sisyphus is in hell for capturing and torturing Thanatos; no one could die. He had to be punished for this outrage.” This issue has sparked much controversy among the citizens of Corinth. Many suggest that Sisyphus got what he deserved, while supporters and friends hope for his return one day. Also implicated in the debate is the sun god, Apollo. Apparently, according to the son of Zeus, Sisyphus had approached him about how to kill Salmoneus, Sisyphus’ brother, with impunity. Naturally, the sun god was shocked and sent Sisyphus away. Yet, many witnesses state that the legendary founder of Corinth claims Apollo told him to sleep with Salmoneus’ daughter Tyro for a more fitting revenge. Charges are pending in this case, but, if convicted, Sisyphus may incur an additional punishment, like barbed wire being wrapped around the boulder, or a demon whipping him mercilessly while our founder struggles with his rock. The feud between Sisyphus and Salmoneus is well known among the citizens of Corinth, but the causes still remain a mystery. Presently, Sisyphus is serving his eternal sentence in Hades. The Lord of the Underworld could not be reached for comment.