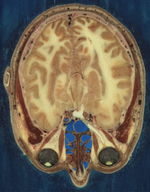 This is not really recent news, but in the light of this week’s reading for my New Media class, I thought it might be worth a look: the Visible Human Project. Ray Kurzweil suggests that the first step to reproducing a human brain would be to study it invasively to see how the synapses and neurons are put together to develop various algorithms that mimic that behavior. While a corpse’s brain may reveal quite a bit of information, we probably wouldn’t want to model intelligent machines on a dead brain, especially one of a convicted murderer. I guess we need to be medieval at first, before we can develop other means to get this information. To me, this seems similar to the Human Genome Project.

Kurzweil takes it a bit further by speculating that invasive techniques could lead to non-invasive scans. We could then that an exact scan of the brain and make a digital copy. This copy could then, in theory, be uploaded to a new brain. Kurzweil continues:

What Will We Find When We Do This?

We have to consider this question on both the objective and subjective levels. “Objective” means everyone except me, so let’s start with that. Objectively, when we scan someone’s brain and reinstantiate their personal mind file into a suitable computing medium, the newly emergent “person” will appear to other observers to have very much the same personality, history, and memory as the person originally scanned. Interacting with the newly instantiated person will feel like interacting with the original person. The new person will claim to be that same old person and will have a memory of having been that person, having grown up in Brooklyn, having walked into a scanner here, and woken up in the machine there. He’ll say, “Hey, this technology really works.”

There is the small matter of the “new person’s” body. What kind of body will a reinstantiated personal mind file have: the original human body, an upgraded body, a synthetic body, a nanoengineered body, a virtual body in a virtual environment? This is an important question, which I will discuss in the next chapter.

Subjectively, the question is more subtle and profound. Is this the same consciousness as the person we just scanned? As we saw in chapter 3, there are strong arguments on both sides. The position that fundamentally we are our “pattern” (because our particles are always changing) would argue that this new person is the same because their patterns are essentially identical. The counter argument, however, is the possible continued existence of the person who was originally scanned. If he--Jack--is still around, he will convincingly claim to represent the continuity of his consciousness. He may not be satisfied to let his mental clone carry on in his stead. We’ll keep bumping into this issue as we explore the twenty-first century.

But once over the divide, the new person will certainly think that he was the original person. There will be no ambivalence in his mind as to whether or not he committed suicide when he agreed to be transferred into a new computing substrate leaving his old slow carbon-based neural-computing machinery behind. To the extent that he wonders at all whether or not he is really the same person that he thinks he is, he’ll be glad that his old self took the plunge, because otherwise he wouldn’t exist.

Is he—the newly installed mind—conscious? He certainly will claim to be. And being a lot more capable than his old neural self, he’ll be persuasive and effective in his position. We’ll believe him. He’ll get mad if we don’t.