I re-read Rushdie’s Haroun and the Sea of Stories over the break, and I realized how pertinent its messages still seem to me. The novel advocates communication — of making connections though dialogue and art. The act of engaging our fellow human beings takes center stage in Rushdie’s novel: as long as people have the gift of gab, the world remains a magical place full of wonder and possibility. Many prefer a world of silence, where free speech is khattam shud, or completely finished, dried up, kaput, over and done with, nada. Talk, in all of its forms, breaks the silence, shines light on the darkness, and offers various paths for our thoughts and lives to take. 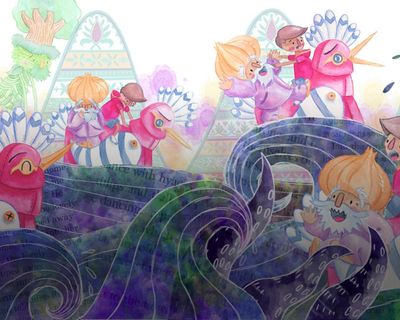 The central metaphor of the novel, the Ocean of the Sea of Stories, is very postmodern, as is the book’s message. The narrator describes the sea:

Like individual currents in a sea, these stories combine to form new and interesting flows of narrative so that all future stories are mixed from the eddies of old. The metaphor speaks of continuity in time, of the cyclical nature of our tales, and the novelty that comes not from making up a new tale, but combining the old in new and interesting ways, like a juggler adding a new ball to the mix of objects she already has suspended in the air. This sea is alive, not something dark and stagnant, but something unpredictable and moving — full of life. This motion seems to be part of its beauty: it cannot be contained or controlled, but like the oceans of earth, it’s integral for vitality and life.

Stories, as the dark figure of the novel suggests, also cause trouble, yet they only cause trouble when one attempts to control them. Unlike a fearsome and formidable villian from traditional fairy tales, Khattam-Shud is a “skinny, scrawny, snivelling, drivelling, mingy, stingy, measly, weaselly, clerkish sort of fellow” that wants to control the world by stopping the Wellspring of the Sea of Stories. The evil here is not obvious: it looks like a non-descript clerk. Yet this figure seeks to zip up everyone’s lips to cut off the supply of gab, essentially poisoning the sea and freezing the ability to communicate or take any delight in the world. This figure reminds me of many talking heads on CNN. Perhaps the enemies are not the redoubtable warlords, but the suited bureaucrats with MBAs (or barely Bachelors)?

Haroun’s world of ambiguity also demonstrates the necessity of adversity, of shadows, of sadness to overcome. Like the need for conflict at the foundation of a good story, life, too, is full of struggle, more quotidian than heroic. Yet, Haroun asks what will we do with that conflict? How will we let it affect the stories of our lives? True, there are factories that seem to produce nothing but sadness, but those, too, are part of the narrative for now. One of the novel’s central questions is “What’s the use of stories that aren’t even true?” Well, like the fake Hollywood endings that we all seem to enjoy, they give us hope that we can make our reality match our fictions, for good and bad. The only evil words are no words at all: khattam-shud.