My new media course is a work-in-progress. Fluid and glib, new media flows through the cracks and gaps of our analog existence, attempting to fill them in, break them open, and otherwise destroy what we have come to expect of the “real.” How do we attempt to contain this fluidic nature in one course? Where do we begin? 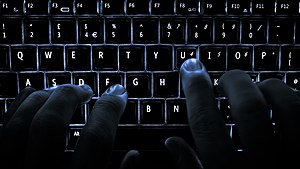 Well, it seems we could begin by making a distinction between “media” and “new media.” Perhaps this is as simple as a distinction between the “analog” and the “digital.” What is that distinction? Are we the digital people grown from the analog kids (as Hayles might suggest), or are at the beginning of our “posthumanity”? If so, what does this mean? It seems to me that much of this distinction has to do with how we look at the code. If, like K. Eric Drexler does in his Engines of Creation, we view technology as the manipulation of atoms, it seem that we are on our way to rewriting what we mean by “reality.” If nanotechnology, biological engineering, and robotics describe the future of human technology, according to Bill Joy, then we are on the cusp of decoding the the very code(s) of Nature and Evolution — perhaps the first programmers. That would make us the quintessence of the hacker: cracking and re-coding the programs of God.

Does the digital suggest that we will be literally (re)writing the future? Is cinematic CGI just the first step to realizing the physicality of our precious simulacra? How long until we can digitally sculpt our visions of perfection in our physical environments as easily as we do on the movie screen? Is embracing the digital the first step to the inevitable demise of the human as we know it? Is this prospect a bad thing?

As you can see, we are dealing with important issues. Where do we start?

Let’s begin with the literary visionaries who find themselves at a crossroads between the world of print and the world of the screen — some might say “terminal.” What is the future of literature gone digital, both in production and theme? We’ll start with Bruce Sterling since I know his work pretty well. After all, many would suggest that a networked world of the digital would be utopian; we’ll see what “Meneki Neko” suggests in the shadow of Neuromancer.

That said, I must confess that I have never taught this course before, though I have struggled with many of the issues for years. Therefore, I have decided to let the course design itself from week to week. While some may attribute this decision to laziness on my part (who wants to spend his holiday designing courses?), I must risk this attitude in favor of allowing the course to have a life of its own, to flow where it must and uncover issues that seem relevant at the moment. Since new media seems to defy categorization and refuses to be bounded, I will approach it thus. Class interest and cultural caprice will drive weekly work. There.