What started as an excellent ride northwest on 41 ended with the R80/7 stalled in the middle of Zebulon in a torrential downpour. Now I’m drinking cheap whiskey and Coke in an effort to warm up, having walked home in said downpour, gear on, irritated, and wet to the bones despite my rain gear. 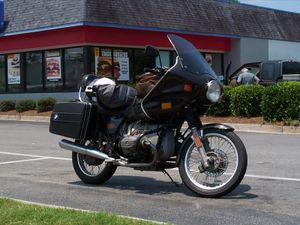 Since there was not a cloud in the sky all day, I decided to take a ride up 41 to Forsyth, west to Barnesville, south to state road 80 at Roberta, then east to finish where I started, about 70 miles altogether. 41 is beautiful between Macon and Forsyth: rich green trees, open fields of horses and moo-cows, and a curvy two-lane road. The road parallels a train track, and I followed the longest train I had ever seem most for the way; I was moving slightly faster than the mile of diesel-powered boxcars. I made it to Forsyth and looked around the town square for a bit. It seemed like a quaint, small-town that one would expect in the middle of Georgia.

Quitting Forsyth and heading west on 41, I encountered my first taste of rain just east of Barnesville. By the time I stopped to put on my rain gear, the sky had cleared considerably, but I kept the gear on knowing how capricious the weather has been as of late. Barnesville was also quaint a la Forsyth, but I was now concerned at the black clouds on the southwestern horizon, so I made my way to 341 and headed south toward Roberta, knowing that I would probably make it back to Barnesville with Giles sometime this month.

Soon after turning on 341, I was almost killed by this serial-killer van that leisurely pulled out in front of me. I swerved around him and shot him a look through my helmet. The bubba was oblivious, probably thinking about his barbecue dinner or beating his wife: no time to watch out for motorcyclists. As I travelled south—341 was not as narrow or curvy as 41, so I was able to increase my speed a bit—I noticed this blackness in the south that seemed to be stationary. After about 25 miles, I arrived at a Chevron station on the corner of 341 and 74; it started to rain, though the real blackness seemed to be sitting further south. After a short break to have a Gatorade and talk with the little man who seemed really interested in my R80/7, I decided to head back on 74 rather than continuing south to 80; Roberta would have to wait for another day.

As I rode east on 74, I ran into pockets of rain, but nothing too bad until I got near I-475. Somewhere along the way, I had to switch to my reserve tank. I never know when this is going to happen, since I have no odometer nor a fuel gauge. I figure that my reserve will take me at least 30 miles, so I wasn’t sweating it. The wind and rain picked up, and my face shield began to fog. I couldn’t open it because of the moisture, so I made due with limited visibility. I finally made it to I-475 and decided not to waste any more time: I took the interstate. Exiting at Zebulon, I remembered being on my reserve tank, so I turned into the Texaco to get gas. As I fueled up, the flood hit. Utnapishtim (mythological equivalent of Noah) would have been impressed with this rain. Blackness and sheets all around. Shit. I thought since I was just a mile from the apartment, I would go for it. Mistake.

Something in the engine got wet, and as I sat waiting to turn left—I couldn’t see a damn thing, my glasses and faceshield were covered with water and the foggy manifestation of my own breath—the engine sputtered and stalled. I could not get it started again, so I pushed the bike into the nearest parking lot and walked home. The bike is still sitting at the bottom of the hill awaiting rescue, but something is going to have to dry before it goes anywhere, I’m afraid.

What I don’t understand is that when I got stuck in the rain in St. Augustine, Terry rode the darn thing all the way home—about 50 miles—in the rain with no clutch cable and no trouble. Sheesh. Just my luck. Speaking with Terry a few minutes ago, he had no idea what it could be: “Maybe the air filter. Maybe the points.” While I like my R80/7, I’m thinking I should have just gotten a later-model BMW. Should I still take it to Mobile next week? That’s all I need is to get stuck in the middle of Alabama and have myself a good ol’ Deliverance experience. I wanted adventure.