Heavy weather loomed like a lover’s frown on the otherwise cheerful blue sky portending either a wet ride south, or enough cover from the sun to allow travel to be relatively sweat-free. Since I had not yet ridden the Nighthawk for any length of time on the interstate, I decided to take I-75 to Mom’s. After some initial trepidation, I was soon flying with a smile as the speedometer hovered around 85 for over an hour before I made my first gas stop in Tifton. After a delay—Burger King messed up my vegiburger—I was soon heading south toward Florida. I stopped again at the Florida welcome station for a bit of a rest before continuing to Lake City, then Mom’s. I made good time, arriving about four hours after I left Macon. 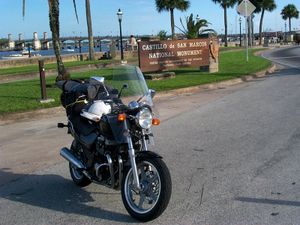 I was jazzed and wanted to keep riding, so I headed east toward the Atlantic and St. Augustine, about 60 miles from Raiford. I encountered a bit of rain, but made it to the historic section of St. Augustine in about an hour and a half. After some pictures, I went to the beach to admire the lure of the Atlantic that I had seen just a couple months before. The water’s blue contrasted with the sky’s, joining in the ocean’s siren song. I paused just long enough to let her caress my feet before needing to head back to Mom’s for dinner. I should have just made it.

I didn’t. More rain and slow-moving traffic made the return journey closer to a dose of Novocain than an adrenaline rush. It took me two hours to return, and I missed dinner. No matter, I slept well, and I was ready to ride west toward Tallahassee to meet Tom, Martin, and Carmen for a weekend of boozing sf talk.

That’s just what I got, mixed with children, some more riding, and mysterious ant bites. On Sunday, while the parents and children went to Wakulla Springs, I rode to St. Marks and the San Marcos National Monument. I went to a local bikers’ hangout—Poseys Topless Oyster Bar—and had their famous smoked mullet. I ate outside under the Florida sun in view on the Gulf of Mexico, and while it was a great view, I think the flies ate more of my fish than I did. After meeting back up with Tom, et al., we visited some of their friends to go swimming and talk the talk of lazy Sunday afternoons. The road home was partially via another St. Augustine: a canopy road that spoke of the presence of the gods: just east of Tallahassee, this road winds under the verdant reaches of ancient trees, almost air-conditioned through a raised faceplate. The deified air was cool on my tears. All America should contain such arteries.

Love bugs were on the menu for the ride home: my helmet, windshield, jacket, engine—everything—was covered with the pests’ corpses and yellow guts that turn into titanium when they dry. The trip north through the Florida-Georgia parkway winded through Tim’s old town of Albany. It was a short trip to I-75, then to Macon. I was exhausted and relaxed as the cats greeted me. My first ride to Florida had been a success. Now, to clean those love bugs.

My thanks to Martin and Carmen for feeding me and making me feel welcome once again in their house.