I know that’s probably a cliché that all young bikers think about, but it was as close to flying as I think I will ever get on my own. Even sitting behind Terry as he opened up the throttle, I felt a nervous excitement, close to the giddiness that one might feel holding hands with a first love. The breeze brought tears to my eyes as the bike sped down the country road approaching speeds that I’m sure were safe and equally certain were illegal—I can’t be totally sure, since my tears obscured my view of the speedometer.

The feeling of flight never left through the short ride to Starke and back on a nameless country road that seemed ideal for my virgin ride. Though I was not on my own, I felt closer to my surroundings than I had the previous day in the Jetta. The road is right there, racing by at seventy miles per hour. I remember thinking about how truly close to death we were—every truck that passed, every corner we turned, every unidentifiable patch in the road reminded me that I could very easily become my own unidentifiable patch much easier than I could in a car, or really anything else I have done before this morning. That fact rattling around in my brain and resurfacing every so often like those insect-eating fish in the pond, probably intensified my exhilaration. I was finally on a bike—something that I have only read about for the past six months was actually happening. And I liked it.

My grip even loosened up after a while, though I had to hold on to my hat that whole time. I was able to balance myself on the rear pegs, just using my legs to counteract the shifting, breaking, and the sudden bursts of speed as we passed a lethargic heap rambling down the road. 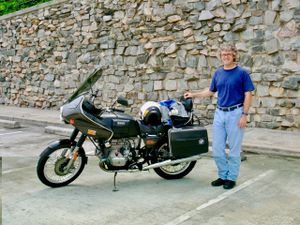 We passed several bikes heading in the opposite direction, and each rider greeted us with a wave of biker solidarity that Pierson and Peart had written about. It doesn’t matter what kind of bike, as long as it was a bike. It didn’t matter where you were, as long as the machine you rode did not alienate you from your surroundings. A nod or a wave carries so much significance as we rode the same road with a seeming implicit understanding of the experience of life that not many get to feel.

It’s impossible to write about riding without being somewhat romantic. And I felt romantic today. When we returned, I immediately began asking Terry about my future bike: I will soon be an owner of my own BMW—Terry’s old bike—a 1978 R80/7. It will make a great touring bike, the sole purpose of my new machine. Every ride is unique. Every ride will be an adventure. Every ride will be recapturing a little bit of freedom that my everyday life has managed to crush. As a friend said to me recently, every ride will be good for my soul.

I take my safety course on June 7th, baring any unforeseen disasters. I'm becoming impatient. I want to ride.