After a brief ride from Macon to Conyers to have my windshield installed, I made my way to Roswell to meet Tim. I followed him back to his place to begin my journey to Dad’s for the weekend. The next morning, after a stop at Starbuck’s for a morning dark roast, I travelled up I-575, until it became state road 5, and made my first stop at a scenic overlook. The morning promised clear and sunny skies as I continued north toward my eventual destination; the landscape turned mountainous quickly as I reached Tennessee. 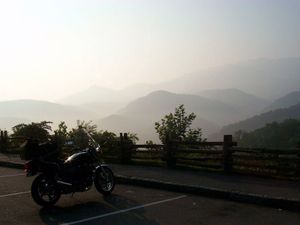 On the Gatlinburg bypass.

After a drive through Ducktown, TN (I saw no ducks), I took state road 68 north toward Madisonville cutting through the western Appalachian Mountains and the Cherokee National Forest. The road changed almost immediately from a straight four-lane expressway to a curvy two lane country road. What a blast. I practiced my cornering, leaning, and countersteering for about 60 miles, rarely seeing another vehicle until I nearly reached Madisonville. The Honda performed so well, I felt like I belonged in this picturesque landscape, a natural creature even in my helmet and padded jacket.

At Madisonville, I took my first real break to have lunch and a clove. I took 441 north to Maryville, then 321 north to Pigeon Forge. 321 produced even windier roads than 68, and I eventually made my way through Wears Valley and then on to Dad’s by about 2:30 pm where I stayed through the weekend. I must say: though I enjoyed my time there, I was ready to travel again the next day. It would be two more days before I again took the Honda very far: my next challenge would be the parkway through the Smoky Mountain National Park, from Gatlinburg, TN, to Cherokee, NC.

I left about 8:00 am on Monday morning, August 18, my birthday. I could think of no better way to spend the day, so I set out in high spirits. The weather person promised no rain, but the morning was misty—what would be termed “smoky” in Appalachia, I guess. The air was cool as I made my way south and up up up though the park. If there had not been any cars, the trip would have been perfect, but I was delayed behind slow-movers for most of the way up the mountain. I expected as much. The summit produced a great views of the Smokies.

Coming down on the North Carolina side, I again stopped for a few more photos. I reached Cherokee by 10:00 am, nearly two hours to travel about 30 miles. Yet, it was worth it. My first ride over the mountains had been great—no problems at all to report, and I was apprehensive for most of the time beforehand.

From Cherokee, I continued to follow 441 south and had lunch in Athens while watching undergrads and their backpacks attend their first day of the fall semester. Luckily, my semester started on the 19th. After lunch, I rode to Macon (441 was not nearly as scenic as 11), arriving about 4 pm, tired but feeling great. My first longish trip on the Honda was a success. For Labor Day, I’ll probably head south to Tallahassee to meet Tom. Plenty of winding roads left in GA. I plan to take my riding test tomorrow so I can be officially licensed; wish me luck.