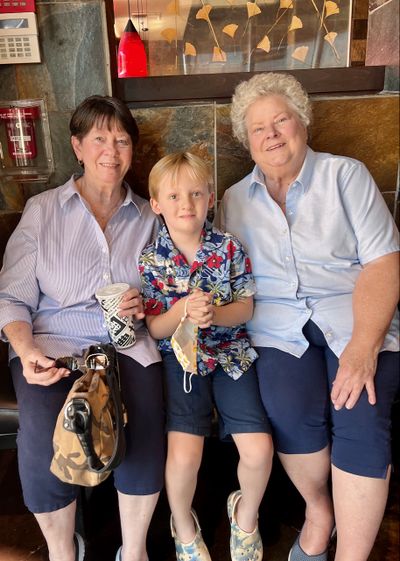 Mom, Henry, and Gail after lunch.

Henry, Autumn, and I drove down to the Cincinnati ’burbs and took Mom and Gail out to lunch at P. F. Chang’s. It was a lovely day—a bit warmer than yesterday, but after a 3-mile walk this morning, I was ready for some family time. Mom and Gail looked great and were ready to go when we arrived. We caught up all the way to lunch, and we all enjoyed our rice bowls. After lunch, we had Graeter’s, of course. The Rahe sisters seem to be doing fine, and I remain grateful to Christy, Gail’s daughter, for providing such a comfortable place for them to live together. We had such a good time, that I feel bad it wasn’t a longer visit. I have to do my best to get back up here soon.

After dropping Mom and Gail off and wishing Brady—Christy’s son—a happy third birthday, we went to the Cincinnati outlet mall to get Henry some shoes. We were chatting as I looked for a spot in the crowded parking lot. I forget now the context for the comment, but he remarked that God created the world and that Jesus helped him. “I really believe that,” he said. Now I have heard him bring up Christian mythology before, but I would be lying if I said it didn’t concern me. I know that living in the south—shit, living in America—he’s going to be exposed to Christianity, but I always thought we’d be able to talk about it. After Henry’s comment, I gave Autumn a where-did-he-get-that look, and she only shrugged. On our walk into the mall, I asked Henry about it, and I received a similar response. “You know,” I said, “many people believe that a god created the world, but you know there are many other stories that you might want to hear before you make up your mind.” He then put his fingers in his ears and said “No, no, no, no, no!” and walked on like he had seen a ghost.

Now, I would like to think that I would be OK with Henry believing anything he wanted as long as it was a result of critical consideration of all the facts. Yes, there are certain subjects where I am intolerant—I know this—and religion is one of them, considering it is based on zero facts. In most respects, it is a source of evil in the world based on fear and ignorance. It keeps people quiescent and looking toward a reward in heaven while it takes advantage of them in this world—the only one that we know matters. I have never understood this urge to worship that which we don’t understand—to give divine agency to cosmic mysteries while ignoring facts that are right in front of our faces. Religion keeps us primitive and tribal, and while the religious texts of the world might provide some insight into our place in the universe, this wisdom is not divinely inspired, but a product of human striving. Religion seeks to keep us from growing while enriching and empowering the church. It is an institution that needs to be disposed of. Disagree? Well, just look at recent SCOTUS decisions, especially the overturning of Roe v. Wade for evidence of religion’s malignancy. Most of these proclamations are a result of some emboldened religious crusaders imposing their own (im)moral vision on the world. If this is not evil, then evil means nothing. I rest my case.

What annoys me about Henry’s reaction is that it is seems to be a very religious one: I already know the truth, so I don’t need to hear any of your blasphemy. How can he already be intolerant at 6? Again, if he chose to believe after being presented with evidence and alternatives, I wouldn’t be happy, but at least I know that he thought about it, rather than having been indoctrinated. Now I just want to find out where he’s heard this god and jesus crap. I will. 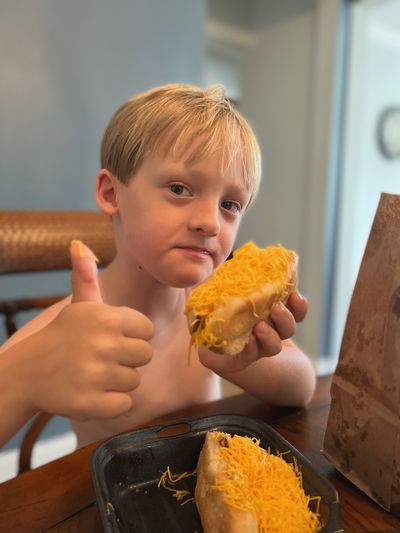 Anyway, after we got back, Spencer brought in Skyline, so Henry got to try his first ever coney! He lied it at first, then said he didn’t. It turns out, he just didn’t care for the piles of cheese on top, so after we took some of that off, he ate them up. The kid just doesn’t like too much cheese. I’m beginning to wonder if he’s truly my boy. I ate my three coneys with Spenser, and he and I chatted. He had been telling me about one of his favorite whiskey bars in downtown, so we decided to have check it out.

We arrived at The Century about 20:30. I started with a Manhattan which was excellent, using rye and a bit more bitters than I am used to but that I really liked. I had intended on only having one, as I have been enjoying life without alcohol lately, but Spencer was insistent that I have a couple. My next one was from their “private barrels”: Yellowstone 109 proof. It was smooth and I tasted vanilla—not harsh like other high-proof and bottled-in-bond bourbons that I have had. While I nursed these drinks, Spencer and I had what seemed to me our first real conversation. I had my misapprehensions about him, so it was nice to clear those up and talk a bit about life. He is a well meaning guy, recently married, and going though similar struggles that I was in my early thirties. I’m glad we had a chance to spend some time together.

After a bit, his friend Mike showed up for a drink. Spencer pushed me to have one more drink—this time it was a small Knob Creek from the private barrel—good, but not as good as the Yellowstone—while he joined Mike for another Old Fashioned. I got a club soda and nursed my Knob while the medical guys had a couple more. Mike was interested when I told him I was an English professor, and he asked me about Hemingway and Mailer. As he is interested in historical fiction, I recommended Armies of the Night. I should send him a copy.

I ended up driving us home, getting back around midnight. Autumn, Henry, and Lisced had finished up their Pixar movie night and were headed to bed. I’m glad I was able to say good-night. It was a busy day, but a good one, not free of problems, but these are things I can work on. Thanks to my (extended) family for making it memorable.