Friday is not the day to ride to McDonough—especially in the late-afternoon. Nevertheless, Giles and I took a ride to fetch Indian for dinner—I on the GS and he in his M235. I led the way up, taking some back roads à la Waze that I had not ridden before. It was a lovely 60-mile ride with the longest final half-mile I have ever experienced. Masala Cottage is not conveniently located, so we had to travel under I-75 at the worst time with every other truck, motorcycle, and car in the freakin’ state. Still, we got there just after 4, and our orders were ready to go.

Giles led the way back through the chaos, even after my warning not to do so, and I lost him when we hit GA-23 again. The way he was going looked like it was just turning north, and I had hot Indian food in my top case, so I just headed south. An hour later, I was back at home.

The gate was shut, so I had to stop on our shitty, slopey driveway to open it. Well, the bike slid forward and fell over—my first drop. I managed to pick up the bike myself, but of course there’re now some scrapes. Dammit. Well, the protective equipment the last owner installed did its job: the scrapes are on the bars and the head protectors. Still, I hate it. Yes, it could have been worse. Still. Dammit. 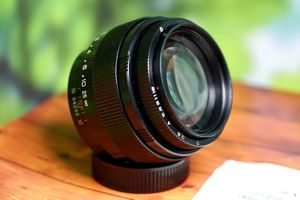 To continue my 85mm love affair, I ordered a Jupiter 9 from a dude in Nizhegorodskaya, Russian Federation—Moscow, essentially. It looks like a later, black copy in clean condition. This image is from his ad. It looks like the serial number begins with a 85, and supposedly that’s the year of manufacture which would make this a mid-eighties copy. An earlier, silver one would have been nice—to match my Jupiter 8—but looking through a lens is more important than looking at it. It could take up to 45 days to get it, but I will be patient. The seller has all positive feedback, so it should be fine. Maybe I’ll get lucky and get it earlier.