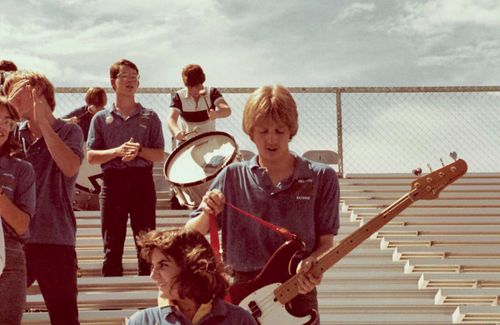 I’ve lost another high-school friend. First there was Ken Turner, now Mark Habedank. Mark and I lost touch just after high school, as I did with most of my friends from those crazy four years. Is that how it generally goes for everyone? Friendships were so intense then—everyone so engaged and tight, involved with one another on multiple levels—it seems so odd that those feelings and folks should just evanesce like a Tuesday in April.

Mark was no exception: we spent a lot of time together. He was a bass player in the band and he had this old Monte Carlo that I rode in to school on more days than I can remember. Mark literally lived around the corner. He was a photographer, probably responsible for the band’s entire (over?) representation in our senior yearbook. Mark was a nice guy. Quiet, maybe shy. He and I worked at Hardee’s together—he might have even gotten me that job. His career with them lasted longer than mine did, certainly. He saved money throughout his junior year to purchase a Steinberger bass like the one Geddy Lee played on Grace Under Pressure. Oh, and he was a Rush fan.

I spent many an hour at his house, driving around Bradenton, or just goofing around. He was a cool guy, and the world is a sadder place without him. Rest in peace, my friend.