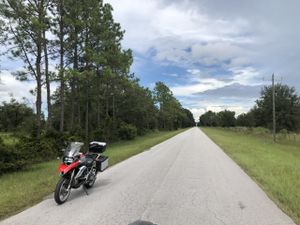 The whole ride today was about 475 miles—the last 30 felt like 300. I started on the interstate to make a bit of time in the morning, then got on back roads shortly after crossing the Florida border. I rode through some rain on some very back roads, before arriving on 19 south: four lanes running through nothing until I reached Crystal River. Then everything. It was hotter and moister than a sauna in a shower. I managed to make it to Tom’s around 4pm. Despite the end, it was an easier ride then I thought it would be, and the BMW R 1200 GS performed like a champ. Just remind me to stay clear of 19 forevermore.

It was beyond great to catchup with Tom. It feels like it’s been an ice age since I’ve seen him last. We picked up right were we left off: the sign of a true friendship. They seem to be doing well, of which I’m glad. I’m going to hang out with them again on my way back north this Sunday.