Today may have been my longest ride yet on the BMW R 1200 GS—about 260 miles, from Augusta to Pigeon Forge. The sky was overcast, but as the temp was much like it was yesterday, I did not layer. I regretted that soon enough and stopped about 50 miles north-east in Elberton, GA to micturate and layer-up. 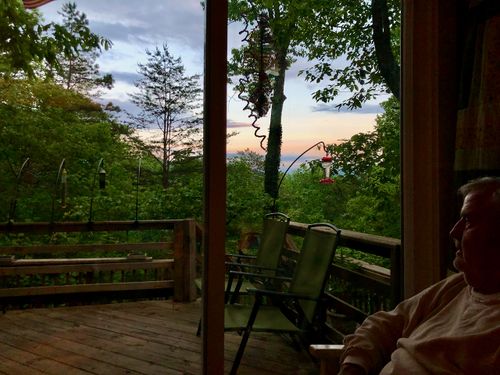 Gas stations were unusually busy, and this one had only 87-octane which they were limiting to 10 gallons per person. I didn’t think too much of it, but as I traveled further north, I noticed that many gas stations had bags over their nozzles. Apparently, some hackers installed some ransomware on the Colonial Pipeline. By the time I got to I-85 in Lavonia, I wondered if it might just be wise to turn back toward Macon. Luckily, I found a station with gas, so I topped off my tank. If we’re have a gas crisis, maybe I need to use this full tank to get home. Goodness knows, I wouldn’t want to get stuck in Pigeon Forge. After chatting with Autumn, I decided to chance it. With this fill-up, I would get to PF and part of the way back to Macon, but I would need one more tank, probably round Athens.

Like yesterday, the temperature never really got above 70°F. The clouds disappeared by mid-day, and it was perfect riding weather. I made it to Cherokee by 13:00, or so, and rested at the welcome center. I was tired, but I had already covered over 200 miles. The ride over the mountain was pretty bad, as they were blacktopping the road on top, so there were delays and back-ups. It took two hours to go 30 miles. I already decided to find an alternate route back.

Getting into PF, I decided to top-off the tank, if I could. No problem getting gas here at all. A full tank might even get me all the way home, though that would be pushing it. I may head west and hit Deals Gap for the return trip. I could go down through Dahlonega, GA, then pick up 400. I’m not too keen on interstate travel on the bike, but that might be the best place to be sure I could get some gas. Well, I have a few days days to decide.

Since the light was so nice when I arrived, I talked Dad and Sharon into some shots with the Pentax 67 📷, just in case we don’t get to it again. These shots use the Takumar 2.4/105 on Kodak Portra 400 🎞.

Sharon offered to take one of Dad and me with the 67, but we settled for an iPhone shot.

Dad, Sharon, and I spent the evening chatting and watching the birds.