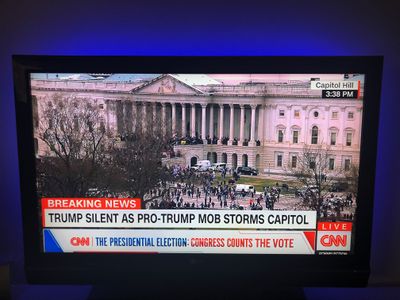 ’Rump supporters attacked the capitol building in DC today, after a planned rally incensed a misinformed and violent mob to try to stop the counting of electoral votes by the Congress. This event seems a predictable ending to a failed presidency for the worst person to have held the office in my lifetime—maybe all time. He is guilty of sedition and should be removed right now,[1][2] but that won’t happen, so I only hope he is prosecuted when he again becomes a private citizen in under two weeks. He and his loyal enablers need to pay for the damage they have done and will continue to do to this country. While many of us have known the dangers of ’Rump for years,[3] the consequences of his lies has finally manifest into something that cannot be ignored, even by the most stubborn of us, I hope. Maybe this will be the turning point in our divided America.

Speaking of turning points: in good news, Georgia elected Jon Ossoff and Raphael Warnock to the Senate yesterday, thanks again to black voters. (Seriously, white voters, what the hell?) The best part about this victory is the removal of McConnell as majority leader. While I’m not optimistic about progressive legislation, at least some progress can now be made. They just may have to get rid of the filibuster first.