Greer, SC and a New GS 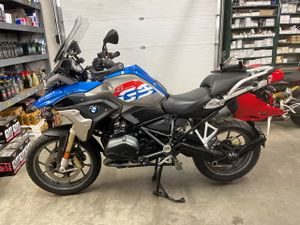 Photo by Diego, the salesman.

Giles and I left after my morning teaching to check out what could will be my new BMW R 1200 GS. I still have not resolved all of the lose ends of the stolen bike, most importantly the insurance payout, but like everything else these days, inventory is low. Therefore, when I saw this one, I jumped on it.

It’s a 2017 BMW R 1200 GS, with just over 27K miles. So, it’s a year later than my first one, and the looks of it are a bit different. Instead of red, it’s blue, and the body plastics have been updated. It has hill assist on the breaks—very nice—and a couple of upgrades, like the pegs and some LED lights. It has the standard bag mounts on it, including the upgraded portion for my Vario top case.

We arrived at Cherokee Cycles in Greer, SC, about 3:30. I was on a test ride minutes later, and I had a big dumb grin on my face the whole way. The hill assist is a definite upgrade, but the bike pretty much rides the same, as expected. I left my cases with them to re-key to the new bike, so it looks like I’m a GS owner again.