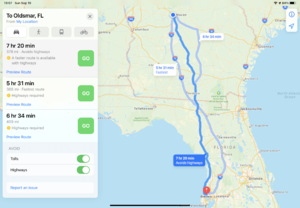 The BMW R 1200 GS is washed and the route is mapped. I’m getting ready for the trek south on Wednesday. I really haven’t been on the GS since my trip to Walter’s in July. It’s been hot, and the last day of that trip was in extreme heat, so I rode enough that day to last me through August. It’ll be good to get back on the bike.

I thought about just hauling down to Oldsmar on the interstate, but no. I will keep to the back road; yes, it adds hours to my ride, but I am not a motorcyclist to ride on interstates. Thank you. I’ll actually be taking some roads I’ve never ridden in Florida, so that’s exciting.

Yes, I have a bit of trepidation about taking the GS. If the worst case happens, I get a into an accident and need intensive care at a hospital—one that’s overcrowded with unvaccinated COVID-19 losers. It’s a risk. It’s a risk in a car, too, really—maybe more so. An accident on a motorcycle usually means death for the motorcyclist, so no hospital necessary. Morbid, I know.

I’m trying to decide what to take. I think I’ll leave the MacBook Pro at home and see if the iPad will do. I have a GSC meeting on Friday morning, unfortunately, but Teams works pretty well on the iPod, so I’ll soon find out. I’m also waffling on taking the Pentax 67 📷, but I probably will. It might be cool to try to get portraits of Kip and Tom. The camera is big, but I’ll likely schlep it along. Otherwise, I can pack light.

So, I’ll see Tom on Wednesday night, then meet Kip at Wings ’n’ Things (a nostalgic haunt that probably won’t live up to memories) in Bradenton the next day for baskets of wings and cheese cubes. Kip posted on his Facebook page that he and I would be there for lunch to see if any high school acquaintances would care to join us and reminisce. It’s a long shot, but that could be fun. After, he and I plan on taking a leisurely ride back to his house in Placida. Stopping for a beer on St. Armand’s circle would be great, but I’ll be on the bike. It’s been a while since I’ve ridden down Longboat Key—in fact, it’s probably been since Autumn and I rode the Nighthawk down in 2003 or 2004. Wow, that was three motorcycles ago! We’ll probably take Tamiami Trail all the way.

I’ll be at Kip’s through Sunday, then back to Tom’s, and I’ll ride home on Monday. I’m pretty psyched.