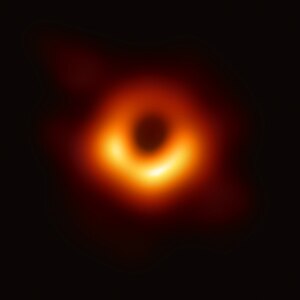 Last night after a Labor Day dinner of grilled meats and while Henry wore himself out in his rented birthday bouncy castle, I watched Black Holes: The Edge of All We Know on Netflix. I saw the recommendation a couple of times on Instagram, so I decided to take a look. It’s two story lines: one is a group of scientists trying to take a photo of the accretion disk of the black hole at the center of our galaxy with the Event Horizon Telescope, and the other is a handful of physicists, including Stephen Hawking, trying to break the information paradox (which, even after watching these folks talk about it for an hour, I still do not understand at all). Both seemed to be successful. I remember the photo when it was published, and it didn’t seem like a big deal. However, after watching the documentary, it is a feat of collaboration and technology. I also remember when Hawking died in 2018, right in the middle of his work on the information paradox.

I enjoyed the film, but it would have been nice having a more general background on our current understanding of black holes. Watching nerdy physicists discussing physics while sitting in conference rooms behind their MacBook Pros is not as stimulating as the filmmakers think.

On Saturday, I watched Reminiscence and while the acting and visual effects were excellent—especially the scenes of a drowned Miami—the story was just neo-noir silliness. It was trying to do Inception with Wolverine, but it failed. Still, it might be worth watching for the setting: it’s our world in the near-future when all the ice has melted and the poor have been left to drown while the rich are still high and dry. Not much of a leap there. There’s a lot of water in this film.

I have to find some new TV to watch now. I’m reluctant to get into season five of Rick and Morty, as I will be caught up and probably have to wait a year for more. At least I could watch the series again.

Retrieved from "https://grlucas.net/index.php?title=September_7,_2021&oldid=16190"
Categories:
This page was last edited on 7 September 2021, at 06:45.
Privacy policy
About Gerald R. Lucas
Disclaimers