Today is one of those days that tests one’s resolve as a motorcyclist. While it started out well, albeit a bit cold, by noon it was pouring with no end in sight. Even the salesmen at Cherokee Cycles were casting apprehensive looks at me. One directed me toward the discount rain gear. “Oh, I’ve come prepared,” I said. I have been doing this a while. “Well, be careful,” he answered, shaking his head as he walked away. The forecast had rain covering the whole route home, but surely it couldn’t last all day. Right?

We got to the dealership around 9:30, but they couldn’t begin the paperwork until 10 when the bank in Nevada opened. Giles and I hit Greenfield’s Bagels a local bagel shop recommended by Diego, my salesman. I had a sourdough bagel with butter, and it was pretty much heaven. Giles even took a sack home with him. By the time we headed back to the dealership, it was already raining. No worries, I thought, recalling yesterday’s perfect riding weather.

I decided to get a helmet. I tried on a medium, white Shoei Neotec II modular helmet that was snug, but Diego seemed to think it fit well. I tried on a large matte-gray Shoei GT-Air II non-modular, but I really like the ability to easily raise the faceplate. Since they didn’t have a Neotec in large, I went with the medium. It’s a beautiful helmet, and I’ve been wanting to ditch my crappy, noisy Chinese one for a while. I also ordered a Navigator VI, but they’ll have to send it to me. 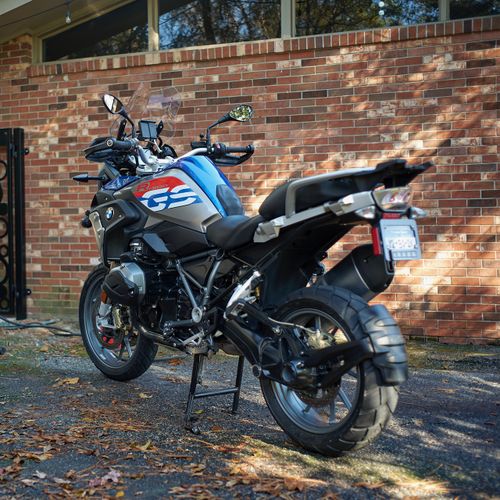 By noon, the paperwork was done, and I was geared up, layered for the cold and wet, with a new Shoei helmet on my head on the back of my new 2017 BMW R 1200 GS. The rain had not really let up, but we had to be back by 5, so away we went. Giles was in the lead, since I did not yet have my GPS, nor was there a mount for my phone. Surprisingly, the rain was fairly light, and I was pretty comfortable. After a bit, my hands and feet started getting a little cold, but the new helmet with its EVO fog-resistant system was working well.

Giles passed the on-ramp for I-85—which probably would have been better in this kind of weather. Usually, when he and I ride together, we avoid the interstate to make the most of the ride. However, today the weather was crappy and we had a deadline, so it would have been appropriate. No worries, I thought; we’d probably hit a nice country road south shortly.

We didn’t. The traffic was dense and the rain was constant. The turns; stop signs; traffic lights. I was getting tired after an hour, and we had only gone about 30 miles. Again, I was comfortable, but I was itching to make some progress and maybe outrun the rain. Also, my helmet started hurting me in the crown of my head, on both sides, like there were pressure points stabbing into my skull. I tried to ignore it and even mitigate the pain by moving the helmet around. I pulled up next to Giles and asked him to get on I-85. By the time we made it there, my head was throbbing like a open wound, so I flashed my lights after seeing a rest stop ahead. Once I got my old helmet back on, I was fine.

By the time we crossed the SC/GA line, the rain had stopped and the sun was starting to peak through the storm clouds. We turned off the interstate toward Athens, and the ride became glorious. Hilly, curvy, and isolated, I was reminded just why I love motorcycling. That 30 miles or so until we hit Athens was sublime, and the new GS alternately growled and purred as we sped along the country road. The dealership did not give me a full tank, so we had to stop sooner than I would have wanted for a fill up. I gave Giles a big grin and a thumbs-up, and I kept smiling as I filled the tank.

After a little Trader Joe’s stop, we journeyed the rest of the way south. By this time, the day was gorgeous, and that weather followed us home.

I was reminded today why I’m a motorcyclist. Comfort is nice, but it’s not everything. You must be prepared, but also sanguine about all rides. Yes, there will be bad rides, but attitude is important. Miserable moods make miserable rides, no matter what the sun is doing. If you’re miserable, you shouldn’t ride—a car is much more comfortable. Riding is less predictable, more existential. In a car, you can get distracted, but that could kill you on a bike. Focus is important while riding, so it’s more like meditation. Every road has its beauty, and a motorcycle puts you right in the middle of it. It forces you to take your time and be mindful not only of what you’re doing, but also of the world around you. The dirt, wet, and danger mix with the freedom, beauty, and wonder in glorious ways in the saddle. Nope, I’m not ready to give this up quite yet.