Easter Sunday: the day we celebrate the rebirth of nature in spring with with chocolate bunnies and crosses for some reason. Predictably, it’s a gorgeous day, and I wanted to indulge in two of my favorite pastimes: photography and motorcycling. We decided I would meet Henry and Autumn down at the Anderson compound for an Easter-egg hunt later in the afternoon, so Giles and I decided to take the long way down to check out Massee Lane Gardens and snap a few photos.

These images were captured with my trusty—and quickly becoming one of my all-time favorite lenses—the Zuiko 2.8/24. The gardens were nice, and it was pleasant to spend some time there. Fortunately, while we were not the only ones there (and those that we shared the gardens with were predictably maskless), I was able to avoid others and enjoy the serenity of the place. 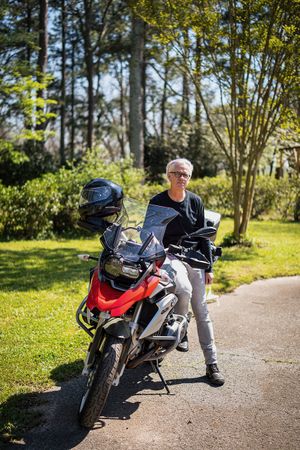 On our way out, Giles captured a shot of me with the GS. I don’t have enough of those. I also took a P67 photo of the GS with the garden in the background. I would have carried the 67 into the garden, but I don’t really have a comfortable way of doing so just yet. I need a handle, grip, or strap. So the P67 stayed in my topcase, unfortunately, though I knew I’d be using it later.

Giles and I parted ways, and I headed toward Kathleen. I took GA-49 south to Marshallville. I considered stopping for a 67 photo, but it was getting late. I turned east on GA-127 to Perry and enjoyed the ride. I was behind a couple of Harley dudes for the duration, but they were crusin’ right along. I wound through Perry and got to the in-laws’ for a bite of lunch and Henry’s egg hunt.

Unfortunately, lunch was a bit awkward, as I had to endure the “reasons” why Robert and Cheryl have not been vaccinated. Autumn brought it up, but I was fine weighing in. Typically, Robert started to bring up some nonsense about a Democratic Party conspiracy that I was waving none of. “Robert, it’s not a political issue,” I argued, “but one of personal safety. Do you want to be responsible for giving my son COVID-19?” Why is it always such a struggle? Is life better this way? Happy Easter. There’s not point in even talking about it. Later, I told Autumn that I would prefer Henry not be round them anymore until they have been vaccinated. She knows better, but I can understand why she might be torn. This is all really stupid.

Anywho, I snapped a couple of photos with the P67 before switching to the Leica SL.

Henry had a great time. I left a bit late, so I couldn’t really extend my ride home. That’s OK, it was still nice coming up GA-247.

Update: I received my Kodak Ektar 100 🎞 scans from the Pentax 67 📷 (wearing the Takumar 2.4/105), and they’re pretty great. I’m still learning, but I think I’m going to love shooting film (other than the wait, of course).