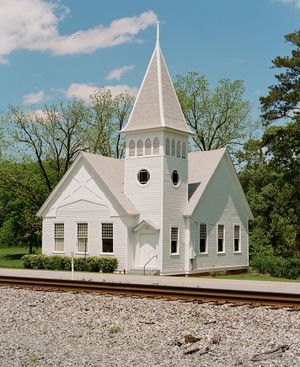 Since injuring my foot a few days ago, I have not been as ambulatory as I’d like. But today was so beautiful, I had to get out there with the cameras. Giles picked me up in his new BMW i3, and we headed north-east on US-41. I brought only my Pentax 67 📷 loaded with Kodak Portra 400 🎞 and my Olympus OM-2N 📷 loaded with Lomography 400 🎞 with me, as I do not have a bag that can accommodate all of my gear. Fortunately, Giles had a larger bag he brought along for me, but I’ll have to play with it a bit later.

I used the OM2 most of the time, since the 67 has fewer photos and the 105mm lens is not exactly the right one for landscapes—everything looked too tight. I really think I need to pick up a 75mm (equivalent to a 35mm) or a 55mm (about a 24mm) for days like this.

Still, I think I got some great shots on both, and the OM2 wore the Zuiko 24mm most of the day—pretty perfect for walking around town. We even discovered this little church ruin, apparently called Saint James African Methodist Episcopal Church, with a graveyard just south of Monticello. A shot of this crumbling structure, complete with a watchful buzzard on top, would have been great caught on medium format.

Again, that day was lovely, and I shot a whole roll of Portra 400 in my 67 and finished the first roll of Lomo 400 in the OM2. That gives me three rolls to send to Indie Film Labs tomorrow, and I’m still awaiting the last two. Hopefully soon. I may have to slow down on the film, though, since these last three cost $60 before shipping. Film is not cheap, so let’s hope it’s worth it.

The other drawback: I have no images to share, since the Leica SL took the day off. Maybe the way to do this is to post once I have them processed, so I’ll be back.