I just finished Octavia Butler’s Parable of the Sower and have started Parable of the Talents. I usually do not like to read the same author or series in a row, but Sower was so engaging, I just picked up Talents. These are tough novels—Talents more so than Sower. They are dark and prescient—written in the 1990s about this decade, and the events that lead up to the setting seem very easy to imagine. 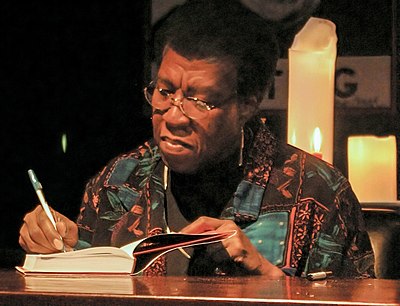 Both novels take place in an American hellscape of poverty and violence precipitated by deregulated capitalism, religious zealotry, and nationalist fascism. There's even a presidential candidate in Talents that combines the worst religious autocrats with with a nostalgia for an America that never was—or at least an America that privileged a white/Christian/male narrative of authority. He even says at one point that he wants to “Help us make America great again.” Sower’s president is a corporate man, letting capitalism do what it does best: overrun communities, make the poor poorer, enslave people in “jobs” that only increase their indebtedness to the company, incite violence and hardship by controlling inventories and increasing prices, and produce commodities that pacify the populace. Stores are safe havens run by small armies that overcharge for necessities. Between stores is an apocalyptic wasteland of misery and death that our characters must navigate. Violent death, especially after rape and torture, has become banal, and many have lost their humanity entirely and become cannibals. I can image that Cormac McCarthy read these novels before writing The Road.

Talents’ president is the real scumbag: a fascist in minister’s clothing (is that redundant?). He rhetoric echoes the early fire-and-brimstone preachers that laid the groundwork for slavery and genocide. That’s exactly what Talents is all about. While Sower showed more indirect consequences corporate power run amok, Talents’ threat is more direct: well regulated and financed militias of Christian fanatics terrorize the country, literally enslaving people (mostly non-white/male) in “reeducation" facilities that are, in reality, concentration camps meant to work people to death. While the fascists use the trappings of religion, they only seek power and control and derive pleasure in the subjugation of those they deem inferior. It’s an old story that is trying to comeback in America today. It’s easy to see the attendees of the former president’s new rallies holding the controls of the slave collars and deriving literal pleasure in torturing those on the left. Butler is scaring the shit out of me. The middle of the novel was very difficult to read. I hope there’s a bit of optimism at the end.

Speaking of bleak: I’m on the third season of The Handmaid’s Tale. I took a break for a while, but it is strong, yet, I wonder how much of this psychological darkness we are supposed to be able to take. Maybe binging this series is not the way to go? Well, it’s too late for that now. I was happy to see Emily’s character arch, but I’m getting wary of the Waterford storyline. I think that will change in season 3.

I think when I’m done with Parable of the Talents I’ll read Atwood’s sequel to The Handmaid’s Tale: The Testaments. I want to get back to Le Guin’s Hainish Cycle at some point, too. Maybe even Lessing’s Canopus in Argos series? . . .