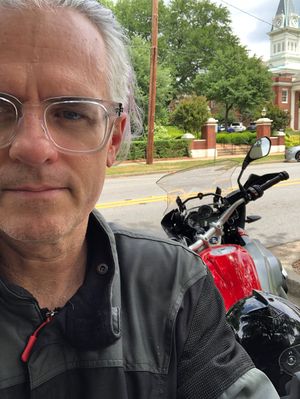 I left late-morning, as Augusta is only 150 miles east, or so—an easy ride. I had some things to take care of at home this morning, and IU wanted to take a walk before hitting the road. I put air in the tires of the BMW R 1200 GS last night, so it was ready to go. I packed this morning, trying to take as little as necessary. As far as cameras go, I decided to take only the Pentax 67 📷 and several rolls of film. Glancing at the weather, I noticed it would get cold some of the nights I was in Tennessee, so that called for layers.

My first, and only, stop was in Milledgeville. The sky was overcast, and the temperature never got above 70°F or so. The ride was pleasant, at least until I got to Augusta. With Waze set to avoid highways, it took me all over the freakin’ place like it did in Greenville last year. I should have known better. Even when I go on the interstate, it got me off again quickly so it could give me a tour of some neighborhoods. I was a bit flustered by the time I arrived.