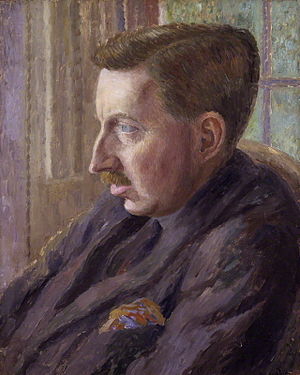 Everybody is talking about reconstruction.[3] Our enemies have their schemes for a new order in Europe, and we on our side talk of rebuilding London or England, or western civilization. Which is all very well, but when I hear such talk, and see the architects sharpening their pencils and the statesmen marking out their spheres of influence, and everyone getting down to the job, a very famous text occurs to me: “Except the Lord build the house, they labour in vain who build it.”[4] Beneath the poetic imagery of these words lies a hard scientific truth, namely, unless you have a sound attitude of mind, a right psychology, you cannot construct or reconstruct anything that will endure. The text is true, not only for religious people, but for workers whatever their outlook, and it is significant that one of our historians, Dr. Arnold Toynbee, should have chosen it to predate his great study of the growth and decay of civilisations. Surely the only sound foundation for a civilisation is a sound state of mind. Architects, contractors, international commissioners, marketing boards, broadcasting corporations will never, by themselves, build a new world. They must be inspired by the proper spirit, and there must be the proper spirit in the people for whom they are working. For instance, we shall never have a beautiful new London until people refuse to live in ugly houses. At present, they don’t mind: they demand comfort, but are indifferent to civic beauty: indeed they have no taste. I live myself in a hideous block of flats, but I can’t say it worries me, and until we are worried, all schemes for reconstructing London beautifully must automatically fail.

What though is the proper spirit? We agree that the basic problem is psychological, that there must be a sound state of mind before diplomacy or economics or trade-conferences can function. But what state of mind is sound? Here we may differ. Most people, when asked what spiritual quality is needed to rebuild civilization, will reply “Love.” Men must love one another, they say; nations must do likewise, and then the series of catastrophes which is threatening to destroy us will be checked.

Respectfully but firmly, I disagree. Love is a great force in private life: it is indeed the greatest of all things: but love in public affairs does not work. It has been tried again and again: by the Christian civilisations of the Middle Ages, and also by the French Revolution, a secular movement which reasserted the Brotherhood of Man. And it has always failed. The idea that nations should love one another, or that business concerns or marketing boards should love one another, or that a man in Portugal should love a man in Peru of whom he has never heard—it is absurd, unreal, dangerous. It leads us into perilous and vague sentimentalism. “Love is what is needed,” we chant, and then sit back and the world goes on as before. The fact is we can only love what we know personally. And we cannot know much. In public affairs, in the rebuilding of civilisation, something much less dramatic and emotional is needed, namely, tolerance. Tolerance is a very dull virtue. It is boring. Unlike love, it has always had a bad press. It is negative. It merely means putting up with people, being able to stand things. No one has ever written an ode to tolerance, or raised a statue to her. Yet this is the quality which will be most needed after the war. This is the sound state of mind winch we are looking for. This is the only force which will enable different races and classes and interests to settle down together to the work of reconstruction.

The world is very full of people—appallingly full: it has never been so full before, and they are all tumbling over each other. Most of these people one doesn’t know and some of them one doesn’t like: doesn’t like the colour of their skins, say, or the shapes of their noses, or the way they blow them or don’t blow them, or the way they talk, or their smell, or their clothes, or their fondness for jazz or their dislike of jazz, and so on. Well, what is one to do? There are two solutions. One of them is the Nazi solution. If you don’t like people, kill them, banish them, segregate them, and then strut up and down proclaiming that you are the salt of the earth. The other way is much less thrilling, but it is on the whole the way of the democracies, and I prefer it. If you don’t like people, put up with them as well as you can. Don’t try to love men: you can’t, you’ll only strain yourself. But try to tolerate them. On the basis of that tolerance a civilised future may be built. Certainly I can see no other foundation for the post-war world.

For what it will most need is the negative virtues: not being huffy, touchy, irritable, revengeful. I have lost all faith in positive militant ideals: they can so seldom be carried out without thousands of human beings getting maimed or imprisoned. Phrases like “I will purge this nation,” “I will clean up this city,” terrify and disgust me. They might not have mattered when the world was emptier: they are horrifying now, when one nation is mixed up with another, when one city cannot be organically separated from its neighbours. And, another point: reconstruction is unlikely to be rapid. I do not believe that we are psychologically fit for it, plan the architects never so Wisely. In the long run, yes, perhaps: the history of our race justifies that hope. But civilisation has its mysterious regressions, and it seems to me that we are fated now to be in one of them, and must recognise this and behave accordingly. Tolerance, I believe, will be imperative after the establishment of peace. It’s always useful to take a concrete instance and I have been asking myself how I should behave if, after peace was signed, I met Germans who had been fighting against us. I shouldn’t try to love them: I shouldn’t feel inclined. They have broken a window in my little ugly flat for one thing. But I shall try to tolerate them, because it is common sense, because in the post-war world we shall have to live with Germans. We can’t exterminate them, any more than they have succeeded in exterminating the Jews. We shall have to put up with them, not for any lofty reason, but because it is the next thing that will have to be done.

I don’t then regard tolerance as a great eternally established divine principle, though I might perhaps quote, “In My Father’s House are many mansions”[5] in support of such a view. It is just a makeshift, suitable for an overcrowded and overheated planet. It carries on when love gives out, and love generally gives out as soon as we move away from our home and our friends and stand among strangers in a queue for potatoes. Tolerance is wanted in the queue: otherwise we think, “Why will people be so slow?”; it is wanted in the tube, or “Why will people be so fat?”; it is wanted at the telephone, or “Why are they so deaf?” or conversely, “Why do they mumble?” It is wanted in the street, in the office, at the factory, and it is wanted above all between classes, races, and nations. It’s dull. And yet it entails imagination. For you have all the time to be putting yourself in someone else’s place. Which is a desirable spiritual exercise.

This ceaseless effort to put up with other people seems tame, almost ignoble, so that it sometimes repels generous natures, and I don’t recall many great men who have recommended tolerance. St. Paul[6] certainly did not. Nor did Dante.[7] However, a few names occur. Going back over two thousand years, and to India, there is the great Buddhist Emperor Asoka,[8] who set up inscriptions recording not his own exploits but the need for mercy and mutual understanding and peace. Going back about four hundred years, to Holland, there is the Dutch scholar Erasmus,[9] who stood apart from the religious fanaticism of the Reformation and was abused by both parties in consequence. In the same century there was the Frenchman Montaigne,[10] subtle, intelligent, witty, who lived in his quiet country house and wrote essays which still delight and confirm the civilised. And England: there was John Locke,[11] the philosopher; there was Sydney Smith,[12] the Liberal and liberalising divine; there was Lowes Dickinson,[13] writer of A Modern Symposium, which might be called the Bible of Tolerance. And Germany—yes, Germany: there was Goethe.[14] All these men testify to the creed which I have been trying to express: a negative creed, but necessary for the salvation of this crowded jostling modern world.

Two more remarks. First it is very easy to see fanaticism in other people, but difficult to spot in oneself.[15] Take the evil of racial prejudice. We can easily detect it in the Nazis: their conduct has been infamous ever since they rose to power. But we ourselves—are we guiltless? We are far less guilty than they are. Yet is there no racial prejudice in the British Empire? Is there no colour question? I ask you to consider that, those of you to whom tolerance is more than a pious word. My other remark is to forestall a criticism. Tolerance is not the same as weakness. Putting up with people does not mean giving in to them. This complicates the problem. But the rebuilding of civilisation is bound to be complicated. I only feel certain that unless the Lord builds the house, they will labour in vain who build it. Perhaps, when the house is completed, love will enter it, and the greatest force in our private lives will also rule in public life.