The Psychology of the Machine: Some Thoughts on Mailer and McLuhan 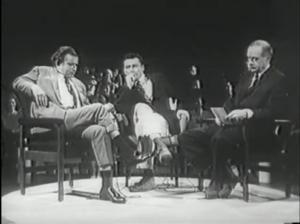 By the end of the sixties, Mailer was observing the end of the world. For him, the sixties brought with it the steady erosion of the artist’s world replaced with the scientist’s. Mailer observed that the novel was becoming less significant than the TV, that protest often culminated in violence, that technological progress seemed to be gutting a more genuine existence of sensuality, risk, and self-discovery and replacing it with a sterile world of “computer-logic”:[2] plastic and circuits that promised efficiency and equality but portended totalitarianism at best and apocalypse at worst.

Mailer’s misgivings are evident in his conversation with Marshall McLuhan in 1968.[3] This is an odd “conversation” in that Mailer seems genuinely interested in debating the consequences of an increasingly high-tech world, while McLuhan seems aloof and de-centered — much like his writing — interested only in espousing pithy aphorisms and germane quotations to make himself look clever. Mailer here is smart and ready to get dirty while McLuhan is barely in the room.

What’s potentially interesting about this conversation is that both men have something to contribute about the effects of science and technology on the contemporary world, but it ultimately seems to go nowhere. Maybe that’s the only place it could go, since any prognostications about the future seemed at the time truly unique, having no historical analog for reference. While McLuhan has been regarded as a prophet of the Internet Age (suggesting his advocacy of it), his work offers a warning about the effects of technology on the unwary, so in this regard, he and Mailer are both cautious of the world’s increasing reliance on how modern conveniences are changing society.[a]

McLuhan’s most famous assertion “the medium is the message” gives technology a kind of agency that has the “power of imposing its own assumption on the unwary.”[4] McLuhan’s world is one already mediated by technology to such an extent that we only understand nature though our representations of it, so that “the environment is now a technological thing.”[5] McLuhan extends this observation into space: a world observed through the ubiquitous eyes of satellites ceases to be a part of nature, but becomes “an artwork” — information gleaned through electronic media.[6] For McLuhan the “environment is not visible. It’s information. It’s electronic.”[7]

In McLuhan’s view, artists deal in simulacra: in creating or programming our relationship to the external world. Perhaps, when the content takes a back seat to the medium, that all art is just the manipulation of the medium. McLuhan does assert that the “serious artist is the only person able to encounter technology with impunity,” seemingly because she is intimately aware of the medium because she uses it to order reality.[8]

Mailer, however, still sees the artist as a type of mage that can penetrate the surface to uncover what’s genuine beneath. In this sense, Mailer’s hero is the novelist, but one that is being superseded at a rapid pace by the hero of the late-sixties: the scientist. Mailer’s concerns are later developed in Of a Fire on the Moon (1971) and The Faith of Graffiti (1974).

In Fire, Mailer becomes like the epic poet recounting the heroic expansion of humanity into space. It’s interesting to note that Mailer does not seem to question the undertaking of the moonshot itself, but the scientific zeitgeist used to accomplish it. The astronauts seem less like humans and more like cyborgs — reducing any heroic and vital qualities to that of programming: “A human being totally determined is a machine”;[9] and earlier: “Obviously, the natural aim of technology was to make intuition obsolescent, and Armstrong was a shining knight of technology.”[10] For Mailer, the entire NASA apparatus was a horrific culmination of engineering that looked “to the day when all of mankind would yet be part of one machine, with mechanical circuits, social flesh circuits, and combined electromagnetic and thought-transponder circuits, an instrument of divine endeavor put together by a Father to whom one might no longer be able to pray since the ardors of His embattled voyage could have driven Him mad.”[11] To me, this idea resonates with McLuhan’s proclamation that “Nature from now on has to be programmed.”[7]

For Mailer, the responsibility of the artist is to penetrate that programming to get at an essence — a truth that is not determined by the machine but that is existential—unpredictable. This quality, to Mailer, is what separates the human from the machine. This genuineness is a moral imperative for Mailer, as can be seen in his conversation with McLuhan. The distinction seems to be the greatest difference in perspectives: while Mailer asserts that getting to the truth is the job of the artist in order to pass a moral judgement on a particular time, place, or situation, McLuhan is content to neutrally observe and record the new world.[12] For Mailer, the artist is the fulcrum of change; for McLuhan she merely uses the media of the time to further program the time.[b]

In other words, for McLuhan we live in a programmed world in which we are part of the program, like a cybernetic loop. For Mailer, it’s the moment of crisis that’s definitive: “He cannot define himself in any environment which has been programmed for him. He can only define himself by getting into situations which are brand new for him.”[14] This is the opposite of NASA’s approach to the moon landing, where every contingency is calculated and programmed, including the astronauts, so that they become like computers who were unaware of their own programming and cannot think beyond it. For Mailer, the moon landing represented the apotheosis of technology worship which coded out the magic of the existential moment by predicting and programming the future.[15] The space race has killed the Hemingways and replaced them with the Armstrongs.

(Mailer expands a bit more on this in The Big Empty, asking whether machines might have an “inner life” that transcends their programming — almost like a “temperament.”[16] He argues, as he has elsewhere, that technology dulls the senses, like plastic, and makes us more powerful in certain ways, but also more inert and soulless.[17])