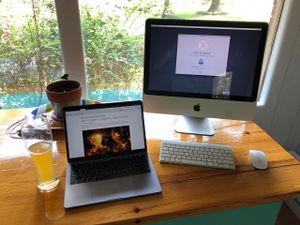 My MBP next to the new family iMac.

We got a new iMac. OK, it’s not “new” exactly — it’s an Early 2009 iMac (iMac9,1) — but it’s one that had been sitting around my in-laws’ house for a couple of years. My mother-in-law was happy to donate it to the cause (Thanks, Cheryl). I saw it and thought: OK, I can resurrect that. A couple of days later I had upgraded the RAM from 2 GBs to 8 GBs (I had some DIMMs sitting around) and the old mechanical hard drive to a SSD (which I also had sitting around). The only cost was $25 for the OWC data doubler.

Some context: I’ve been watching a lot of upgrade videos on YouTube, and I’ve seen quite a few iMac upgrades. Now, this idea is not news to me, nor am I an upgrade newbie, but for some reason I’ve just not thought about buying older hardware and doing some inexpensive upgrades. I’ve had a recent revelation about buying used cars. Why do I need to pay much more for the “new car smell”? For anything expensive? Seriously? New is expensive.

Well, this old-new iMac was a proof of concept. I’m typing on it right now, and it’s a damn fine machine. It’s ten years old, but perfectly usable. No, I’m not going to do any complex photo work, video editing, or gaming — but I don’t do that stuff anyway. What do I do? I write, edit Wikipedia, maintain web sites, and fart around — nothing too taxing for my ol’ machines. A bit of inexpensive RAM and a new, equally inexpensive, SSD will do the trick. I’m pretty damn pleased.

So pleased that I bit the bullet and bought myself a mechanical keyboard: an Apex 7 from Steelseries. Did I need it? No. However, I had a $50 Best Buy card left over from my last birthday (Thanks again, Cheryl), and I have been wanting to try a contemporary mechanical keyboard. I thought I wanted Cherry MX Blue switches, but this has Reds, and it rocks. I haven’t been this pleased with a keyboard since my old Apple Extended Keyboard. Except it has LEDs and programmable keys, etc.

Now, I just have to replace the Windoze superkey key cap. I wonder if I can...