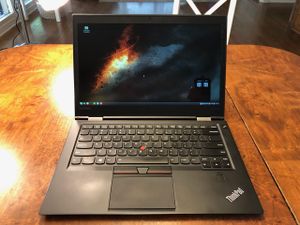 We picked it up on the way into Atlanta: a new (to me) Lenovo ThinkPad X1 Carbon 4th generation laptop. Just a quick boot with the Pop!_OS flash drive I had with me to see if everything worked, a visit to the ATM, and BAM! new laptop.

Autumn and I ate at Bocado, then checked in to the Artmore, our favorite midtown hotel. Within minutes, I had Windows wiped from the hard drive, and a fresh install of Pop!_OS ready to rock. Yes, everything pretty much just worked out of the box, including Wi-Fi, two-figure scrolling on the trackpad, and sleep. Very nice. Even the little pointer nipple works.

I tried to install Dropbox, and I have yet to get that working. Dashlane took a minute to get running on Firefox, though it seems to work fine now. My initial tweaking reminds me that most of what I do on this machine will probably involve more work than it would on my Mac. For example: Dropbox gave me a puzzle to solve that I have never seen in my life. It asked me to use arrows to get animals facing upwards, but only allowed me to press an arrow once. So weird. Oh, and I don't know how to type my special characters, like an em dash or curly quotes. And a quick Google search does not help. Oi. (OK, I got the em dash: Ctrl + Shift + U, then 2014. Seems a bit complicated...)

Still, my goal is to learn something new everyday. I’m off to a good start.

We’re off to see the Revivalists tonight, as part of my birthday present. Beers first.