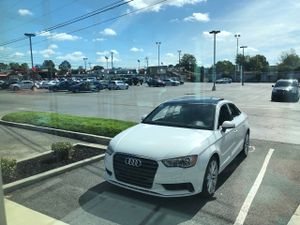 Well, I finally did it. After a few weeks of research and looking around, I think I found the best car for me right now: a 2015 Audi A3 TDI Premium Plus.

Yes, I wanted an electric car, and I did find an excellent e-Golf, but ultimately the limited range scared me off. It would have been fine for most of the driving I do, and frankly it would have been fun to get used to, but for the occasions when I had to get out of town the e-Golf just wouldn’t do. Period. Even if the infrastructure existed (which is getting there), who wants to stop every hour for an hour to recharge? I love the Golf, but not right now.

A diesel seemed a good fit. If I had one major complaint about my BMW, it’s the average-to-poor gas mileage. While it could be worse for sure, it can also be better. And I have always liked diesels. I nearly bought a low-mileage 2012 Audi A3 TDI hatchback, but they couldn’t work with the remained of my lease. Too bad, too; it was inexpensive and a darn nice car.

So, I found this one at Jeff Smith in Warner Robins. It seemed perfect online, and it turned out to be. It has even fewer miles than my BMW! So I purchased it. The only hangup so far seems to be insurance: every quote I’ve received so far is more expensive than my BMW. That’s what I get trying to save some money. Geico still looks promising.

I’m sure I’ll have more to say about the car soon. I pick it up tomorrow morning.