The Stand: A Mini Review 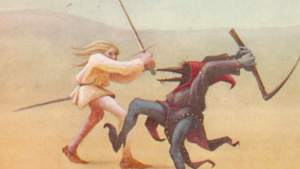 I started reading Stephen King’s The Stand a couple of weeks ago. I sensed I was getting sick, so what a great time to read a post-apocalyptic novel where the world ends from a super flu. While Autumn doesn’t think I had the flu, it was something close, but thankfully nothing like Captain Trips. For some reason when I have an illness worse than a cold, I like to large novel sidecar. The last time I remember having something similar was over a decade ago when I feverishly tore through Neal Stephenson’s Baroque Cycle. I intended this novel to last through the holidays, but it was a quick read for me despite its size. (Holidays are other big-novel times for me: Stephenson has figured prominently as has Norman Mailer’s The Executioner's Song.)

I enjoyed the novel. It's the fist King I’ve read since his Lovecraftian novella The Mist. I’ve read a couple of other short stories — even taught “The End of the Whole Mess” in my Utopia and Apocalypse course — and The Shining as a kid. Since I went through The Stand so quickly, I’m thinking about getting ’Salem’s Lot to get me through Xmas. I seem to want to read and watch horror these days.

While I would not call the novel literary, it was a good page-turner and could make a very good television series. Why do I want to see Matthew McConaughey as Randall Flagg? I’m sure Alexander Skarsgård will do a great job, but in my mind, McConaughey can just do that gritty American evil thing the best. I plan to watch the older miniseries soon, but a new one (not on network TV) will be better. King’s characters seem written for TV, for some reason.

My only complaint about the novel is that it was supposed to take place in 1990, but it felt like it was from the 1970s. Yes, he updated it a couple of times, but why? Later historical references (most notably a late comparison to AIDS) were added, but, again, why? Others complain about sections lagging, like the middle and the longish denouement, but I felt the flow was just fine. If anything, the climax seemed to arrive very quickly for such a brick of a book. (And who couldn’t see that climax coming?) Oh, Trashcan Man. Trash might have been King’s best characters. He does evil well; his good characters are flat (Nick Andros and Tom Cullen are the exceptions) and not too memorable. Harold and Nadine are other stand-out characters, both tragic (pathetic?) in their own ways.

I wonder, too, about the whole Old-Testament feel of the supernatural elements. King did a nice job about implying that these forces are ever-present, but it takes a quieting of modern life to hear them — or a super flu that wipes out most of the population. The mystical apparatus seems derived from a Old-Testament cosmology — where evil is obviously evil and good is insecure, nebulous, and jerky. It’s definitely a force, but it's not all confident, nor clearly good. Its oracle is Mother Abagail, another old-testament character who is both confident and full of doubt. She leaves the good guys at a crucial moment only to come back on death’s door to give final directions. She interprets the forces from a Christian perspective, and it’s hard to see them as anything but.

In many ways, The Stand is a simple morality play for the twentieth century, but it might be that mythic simplicity that makes it fun. It’s archetypal. It’s anachronistic. It’s pessimistic. Everything you’d want when you have the flu.