I have been obsessed with Peter Gabriel for the last couple of weeks, specifically Secret World Live — his concert film from 1994. I must admit: I’m pretty late to Gabriel’s music. Of course, I knew So from 1986, but I was more into Genesis at the time. Now, I see the error of my ways. 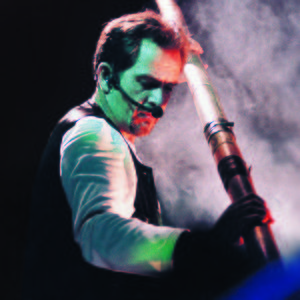 Secret World Live may be one of the best concert films I have ever seen, and I might even like Gabriel’s live versions better than his studio work. Now, I’m no expert in just a few close listenings, and I have yet to go through is entire oeuvre, but the concert is just so powerful. Gabriel’s gravelly voice and perfect pitch are matched perfectly with Paula Cole’s backup vocals — if it’s even accurate to call them that. Gabriel doesn’t just sing: he and his band perform. Each song is a mini-drama, beginning with “Talk to Me” all the way through “In Your Eyes” — there’s not a sleeper in the show. As a commenter on Amazon said: this seems to be Gabriel at his pinnacle. I just wish I had seen this show live back in 1994. I certainly could have. Well, as he says: “Souma Yergon, Sou Nou Yergon.”[1]

My favorite songs are currently “Come Talk to Me,” “Steam,” and “Shaking the Tree.” Gabriel seems interested in abstracts and archetypes — this seems especially true for the former and other songs like “Blood of Eden” and “Across the River.” Other songs seem to be about making a connection or the quest for identity or truth. I’m sure I’ll have more to say as I enthusiastically discover Gabriel’s catalog.

One more related note: I was listening to Shaking the Tree — Gabriel’s 1990 best-of compilation — when I picked up Henry on Tuesday. The eponymous song came on, and I was singing along with it. Henry was silent in the back, and the song ended as we got home. I turned the car off and started helping him out of the back when he sang “Shaking the tree . . . woman’s day . . .” Ever since, he demands to hear “Shaking the Tree.” We listened to it twice as I drove him to camp this morning. That’s my boy.