An interesting thread on Slashdot addresses a Globe and Mail article[1] that speculates that sf might be coming to an unceremonious end like other historically situated literary genres. I would agree that golden age sf is perhaps on the decline, slowly being replaced by the likes of fantasy disguised as sf (Star Trek, Star Wars, etc.), but it seems to me that good sf addresses humanity’s relationship with its technology and how the two have been merging, and will continue to merge at an increasing rate. 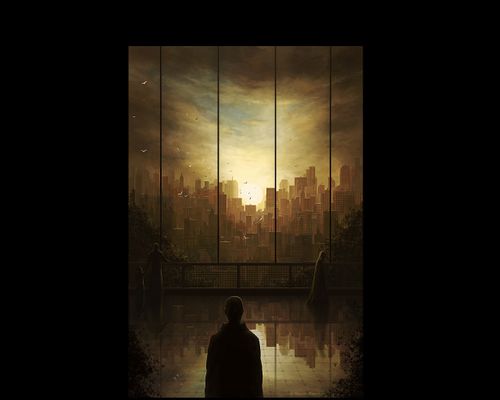 In “Which Way to Inner Space?” J. G. Ballard opines that “only science fiction is fully equipped to become the literature of tomorrow, and that it is the only medium with an adequate vocabulary of ideas and situations.”[2] He expands the role of sf and its writer in his introduction to the French version of Crash: sf should “document the uneasy pleasures of living” within a culture spawned by the “marriage of reason and nightmare” that’s preoccupied with “sex and paranoia.”[3] Ballard’s vision encompasses what he calls the “death of affect”: with the end of emotion and feeling, humanity becomes free to pursue its “real and tender” pleasures “in the excitements of pain and mutilation; in sex as the perfect arena, like a culture-bed of sterile pus, for all the veronicas of our own perversions.”[4] Ballard chooses science fiction to express his vision of a posthumanist world:

Ballard positions sf as the most equipped to address the trend that Kurzweil observes in The Age of Spiritual Machines: human technological evolution. Indeed, science and fiction are coming together in a literal way. Ideologies, like humanism, have often been exclusive by being based on arbitrary distinctions of difference, like race, sex, and class, and these materialistic actualities become coded and essentialized into universals, so the human means something specific and exclusionary while pretending to signify all. Yet this invention of reality, while based on the material, has existed solely in the mythology of Western phallo-logocentrism—until now. Science is now catching up with fiction. With microprocessing technology, we will soon be able to shape our physical realities, represented by our bodies, into forms that fit our fictions. Here, then, is not the realization of humanism: the actualization of universal Man like the Borg, but an even more stratified society based on difference and bolstered by those who can economically afford to physically alter their realities through science.

Sterling’s Holy Fire offers this very idea in a glimpse of a possible stratified future ruled by the techno-bourgeois gerontocrats who deal in “real money for real economy”—a system of pensions, stock ownership, and life extensions for those who can afford it (posthuman), and keeps it securely out of the hands of the young leaving them no access to the “real money” (humans).[5]

I see the work of contemporary sf as beginning with the cyberpunks and continuing in the hands of authors like Sterling, de Filippo, Bear, and others. Robert J. Sawyer is quoted in the article in Globe and Mail: “I think there’s always been to some degree a misunderstanding about what science fiction is all about, in that it has been judged by the general public as being literature of prediction, and it isn’t,” said Sawyer.[6] He continues:

Indeed, sf is about considering issues that face us that have to do with our technology. These issues will become increasingly hidden under the veneer of normalcy as the technology becomes more transparent. This fact might make addressing technology more difficult, but also paramount. Sf might be over in the sense that it can be distinguished from fiction and non-fiction, since the latter two are also wound up with technology, as Ballard suggests above.