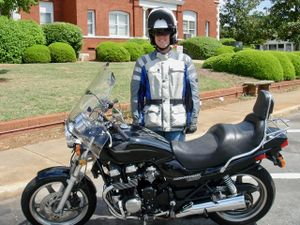 D’OH! The panel I was supposed to chair began at 8:30, not 9. I walked in about 10 minutes late, sat through the panel, then apologized to the panel and those in attendance. They were gracious and let me fill out the survey for the chair. I felt really stoopid and unprofessional, about as much as Tom should feel.

Walter and I attended the luncheon that day: they served the requisite animal flesh in a buttery sauce, but the guest speaker, Marcial Souto, spoke about the translation of sf into Spanish very eloquently. He kept taunting Brian Aldiss by calling his name during the speech, as if Aldiss was sleeping, which he probably was.

After lunch I met Veronica Hollinger, an editor for Science Fiction Studies, Joe Haldeman, and Stephan R. Donaldson. The latter I heard read, and I thought his prose as ponderous as ever, though I still have fond memories of the Thomas Covenant series.

I rode out to the beach this afternoon and took some pictures. It was still windy, but the Atlantic was aggressively beautiful. I found a British pub that I would like to try, and I bought some beer at the local Publix.

Wally and I ended the day with delivery pizza, Publix beer, and more TV. Tomorrow is our panel, and I'd like to explore more of Dania Beach. I still have all of these essays to grade, not to mention Cunningham's novel to finish.