Notes on Poe’s “The Cask of Amontillado”

There’s something just satisfying about reading Edgar Allan Poe. Perhaps it’s the visceral freeing of the id to do what it wants vicariously though characters like Montressor, Usher, and the Red Death. “The Cask of Amontillado” is a deathbed confession to those of us “who so well know the nature of my soul”; the confession may be to an unseen priest, but it’s also meant as a superego confession to the society at large. Poe’s story offers a character sketch, as many of his stories do, of a proud Montresor’s battle between the rational and the irrational, with the latter manifesting itself in the guise of the former. Montresor is an unrepentant murderer, and this notion does not reconcile with any rational perspective of humanity. 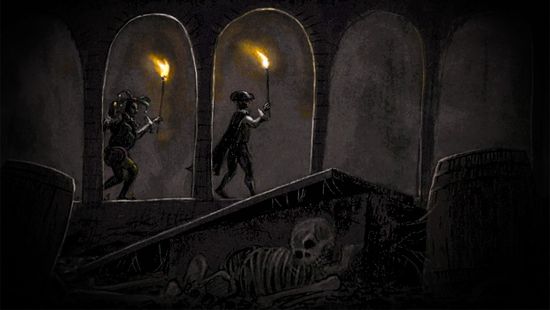 The American romantics, for simplicity’s sake, can be divided into two camps: the optimists and the pessimists. Of the former group, Emerson, Thoreau, and Whitman are the most famous, while the latter group consists of Poe, Hawthorne, and Melville. The romantics saw the universe as split between the order and disorder, and the human mind illustrates this split by providing the battleground between the rational and the irrational. The optimistic romantics sought the truth through a transcendental union of the rational and the irrational forming a harmony, a peace, and perhaps an experience of God. The pessimistic school see only disharmony, contradiction, and terror in this dichotomous split of the human psyche. Despite their respective conclusions, the romantics all felt a profound need for harmony, the need for spirituality (Reason combined with imagination and intuition could lead one to feel God), and the need to establish one’s harmony or oneness with the universe without losing a sense of individualism. While the Transcendentalists might have found success in their attempts, Poe, Hawthorne, and Melville seem only to see disharmony and confusion where the optimists see harmony and truth.

Poe seems to suggest that the only truth to be gleaned in this world is through the actions of others; there is no truth in nature, only dark things that might contain kernels of truth if one penetrates the surface seeming of our lives. If there is a truth for Poe, it exists under the surface, yet this is where madness, isolation, perversity, chaos, and death also lie. In order to try to find the truth, the seeker must risk the darkest aspects of the universe. Poe often emphasizes the irony of madness: the rational world hides any notions of truth, while the more insane or perverse a character seems, the closer he or she is to the truth. Poe also uses the motif of mirrors to characterize the nature of a split universe—that the human soul is cut off from the universe by its own “understanding” based in reason. Humans are in a sense buried alive, for the body contains the essence of humanity, but it is not the human. The human mind, therefore, is limited by the extent of life in the body. Poe desperately wanted the me to live eternally, but saw it as fragile and finite as its bodily container. Humans are trapped between death and time, between the pit and the pendulum, so this knowledge inspires horror, disharmony, and chaos.

In “The Cask of Amontillado,” Poe’s characters are running out of time: Montresor, meaning “my treasure” (sounds like Gollum, no?), and Fortunato, “fortunate one,” both head toward certain death—the former seems to be on his death bed, while the latter is fifty-years dead, now just the contents of the cask that Montresor shares with the invisible you, probably a friend—perhaps a priest—but definitely the complicit reader. Not a confession that looks for forgiveness, Montresor’s narrative seems to seek a sanction, maybe some sympathy, but definitely the admiration of his reader. The social veneer of propriety is broken—probably as Montresor lies dying—since he has nothing left to lose; his family motto “nemo me impune lacessit” (no one provokes me with impunity) has been maintained, so his motivation to confess seems to stem from pride, not remorse. He’s kept his treasure close to his heart for fifty years, and it’s now time to share.

Montressor’s treasure is his cask of Amontillado. The cask is the literal story, but it is also his secret: the one that trapped Fortunato fifty years hence and the one that now fascinates us. We, like Fortunato, are being lead to death, yet we can take comfort in the fact that we’re just reading a story, right? The cask probably also symbolizes the “insult” Montresor received from Fortunato—the latter probably showed him up by identifying a brand of Merlot before Montresor did at the local wine club, or something equally as trivial. Poe’s play mirrors a split view of the universe full of contradictions: the horror of being buried alive is mixed with the humor of a drunken fool walking arm-in-arm with death to the grave. Death gives the fool plenty of ways out, but keeps him on the hook by appealing to his human vanity and the promise of a prize: the Amontillado. Indeed, Fortunato gets his prize, yet the draught is not what he expects. When is it ever?

How is Fortunato the fortunate one? Perhaps Poe suggests that by remaining the fool—or at least drunk—that we can have fun even with death. Yes, death will win in the end, but perhaps a bit of naïveté as we’re led toward the grave will at least allow us to have a bit of fun. Yet, like Poe’s split universe, this interpretation cannot stand without its mirror: by being a drunk fool, Fortunato is anything but fortunate. His state, perhaps a metaphor for the notion of the body blinding the soul, allows him to be buried alive by Montresor. If Fortunato had his wits about him, he could have read the numerous clues that bespoke his doom. Do we know so well the nature of Montresor’s soul? Well, I cannot be truthful with impunity. In pace requiescat!