Eliot and the Mythic Method 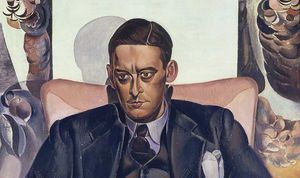 Eliot defines what he exemplifies in The Waste Land—i.e. the “mythic method”—in his essay “Ulysses, Order, and Myth.” The mythic method looked to the past to glean meaning and understanding for what has been lost or destroyed in the present. This method emphasizes the underlying commonality of ostensibly disparate times and locations by employing a comparative mythology to transcend the temporal narrative. By stressing the mythical, anthropological, historical, and the literary, this method becomes at once

The mythic method does not offer an escape to a better past, but an entry to a confusing present.

This method highlighted the reader's participation, by diminishing the authoritative voice of the poet. The voices of the past mingle with fragments of modern life that the reader must then interpret and order. The reader must structure the discontinuity and make her own connections within the text in a sort of quest, rather than being lead by the narratorial voice. The Waste Land’s thematic quest is then linked with the reader's own understanding and coupling of the discontinuous fragments of Eliot's polysemous style. The Waste Land is indeed a language experiment, refreshing and renewing in its random flow of verbal associations that disrupt the controlled and precise poetry of the Victorians. It echoes musically and free, like the flow of the Thames to the sea, not constrained by stifling literary conventions and traditional expectations. This is what makes Eliot difficult, but rewarding.

The Waste Land disrupts many of our expectations, especially on a first reading, and resists our attempts at a unified reading. First, its genre seems confused, more of a poem of the not-yet than one that we can comfortably inhabit. Indeed, Eliot seems to capture the modernist zeitgeist: i.e., that of crisis and rupture—the sheer absence of one, totalizing view of the world. One voice will not provide answers for all. Eliot shows the impossibility of one stable voice by mixing wit and humor even in the face of horror. The Waste Land is anti-heroic and unromantic, nightmarish and fantastic, realistic and dreadful, mundane and otherworldly. Even while we catch glimpses of the comfortable, Eliot never lingers long, confronting the reader with new multiplicity.

While the poem seeks stability, it does end that way. It does end with hope, but also with confusion and uncertainty, and a sense of alienation. We all have a choice, it seems, to set our own lands in order, to shore those fragments against our ruins. However, those fragments and voices will always echo, allowing only brief comfort, if any at all: shantih is peace beyond understanding, and the modern Wastelanders seem still to not understand. Perhaps this is the beginning of the myth of the twentieth century, one we still seem compelled to follow.