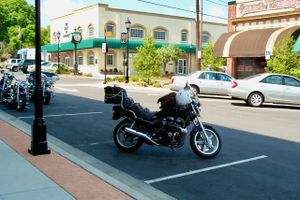 Today, despite the cool weather, I donned my new jacket and, once again, headed south. My destination: the 25th annual conference for the International Association for the Fantastic in the Arts. Walter, Tom, and I are to give a panel on Lem's Solaris at the conference in Ft. Lauderdale, and I decided that I needed to give the Nighthawk a real workout. From Macon to Ft. Lauderdale appears to be about 650 miles; one stop at Mom’s and one at Jesse’s should give me plenty of time and energy to both tour the eastern Florida coast and deliver me in time for my paper presentation on Saturday. At least that’s what I’m thinking sitting here at Mom’s after a quite chilly ride down.

I left shortly after teaching today, about 2:00. The temperature was a cool 68 degrees, but I had several layers and no worries. The sun smiled on me as I rode I-75 south; had it not, the ride would have been much chillier. As it was, I was a bit cool. I figured that the temperature would rise as I approached Florida, but that proved to be erroneous. The ride from Lake City to Lake Butler (a mere 21 miles) proved to be damn cold. That whole expanse of State Highway 100 is shrouded on both sides by trees, and since I was getting there late in the day, the sun was unfortunately as scarce as a bit of class at a NASCAR race. Still, I made the 230 miles in about four hours. I stopped a couple of times for rest and a clove.

I'm excited about my journey south tomorrow. I have never been all the way down the east coast, so I'm looking forward to my ride down U.S. 1. All I need to do is get to Vero Beach tomorrow, about 200 miles, or so. I plan to stop in Daytona Beach at the BMW Motorcycle dealership. Just curious. Hope the weather and temperature holds up. Should be right as rain—ugh, dry.