“Indian Camp” is one of several stories that Hemingway wrote concerning the coming-of-age of Nick Adams. Nick, like those of us reading his story, attempts to glean meaning from his experiences so that he can better understand himself and how he fits into the world at large. Like the reader, Nick’s experience encounters other experiences, and understanding and order must be made out of the intersection of these events. How do we make order out of ostensible chaos? In a world of death, how are we supposed to live? Like other Hemingway protagonists, Nick must develop a code of living that will allow his life to have structure and meaning. 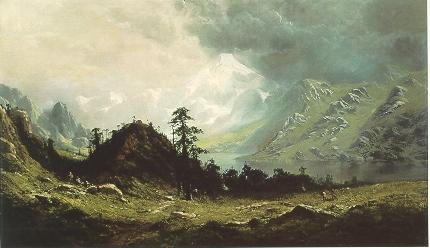 Hemingway’s prose betrays no superfluous details: it’s athletic and suggestive rather than descriptive, making it perhaps more significant and subtle. Since the narratorial voice aligns itself with Nick, seeming to tell the story from his perspective and illustrate his conflicts, it might even be said that the prose presents an accurate representation of Nick’s developing mind. For example, the narrator calls George “Uncle George,” something that Nick would call him, rather than Nick’s father. The narrative could also be called simplistic, though it’s anything but simple, using parataxis to allow the reader to fill in the most poignant details.

The central significance of “Indian Camp” centers around questions of life and death for the protagonist Nick. In the face of a new birth and the inexplicable suicide of the woman’s husband, Nick attempts to order his reality to and bring structure to this ostensibly chaotic circumstance. Other than the obvious suicide, Nick is also aware that something is wrong. He begins to piece together the evidence from his experience: he asks his father, “Where did Uncle George go?” Nick, like the observant reader, attempts to incorporate his recent experiences into a way to approach the world. Hmm, Uncle George handed out cigars to the Indians, something that new fathers do. The woman bit Uncle George’s arm, an action that might suggest a certain intimacy and anger. Hey, what in the world was Uncle George doing with us here in the first place unless he had something to do with the whole situation? Hmm.

Notice, too, that Dr. Adams begins the story talking to his son in a patronizing tone, like one might to a child. However, by the end of the story, Dr. Adams treats Nick like an adult, an equal who is also trying to make sense out of a difficult situation. While Nick takes comfort in his father’s arms at the story’s beginning, he and his father sit in opposite ends of the boat on his way home, suggesting that we are all ultimately alone in how we experience and order reality. Like other Hemingway heroes, Nick must develop his own code for life, a kind of macho self-reliance.

While it may be argued that Nick is in denial at the story’s close—“he felt quite sure that he would never die”—can we really blame him? In the face of an existential awareness of death, many of us do the same thing. It takes time and consideration for us to assimilate trauma. In time, Nick will come to terms with this experience. As for Uncle George...