The Light Was Out

James Joyce’s “Araby” is one of several stories in Dubliners that addresses youth and coming-of-age. Like Nick Adams in Hemingway’s “Indian Camp,” the unnamed narrator of “Araby” attempts to reconcile a difficult life experience with his forestructure in order to come to terms with the event and grow as a human being. The young man has his first crush, feels the sluicing of hormones, and concocts a fantasy around the bazaar Araby. Yet, his fantasies that surround the exotic Araby and his role as the gallant knight evanesces in the face of mundanity. 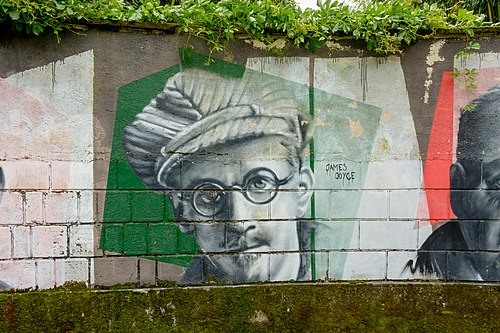 The story begins in winter, the season of stasis and death, and most of it takes place on North Richmond Street, a “blind” street where the houses, like sombre sentinels, “gazed at one another with brown imperturbable faces.”[1] The street, like the streets that many of us remember growing up on, suggests an enclosed and safe place, but like all safe places, they become dead ends (”blind”), since they do not allow any experiences outside of them. The image of blindness also characterizes the young narrator’s view of reality at the beginning of the story.

Adding to the austere setting is the fact that the former occupant of the narrator’s family’s house is a dead priest “who had died in the back drawing room.”[2] Yet, the priest had left some books (themselves victims of the milieu of disease and decay) that colored the narrator’s perception of reality, or at least symbolize his his “foolish blood.”[2] Romantic works by Walter Scott add another dimension to the narrator’s perspective: he sees himself as the knight and Mangan’s sister as his lady. Even in “places most hostile to romance,” he imagines himself in his romantic role: “I imagined that I bore my chalice safely through the throng of foes. Her name sprang to my lips at moments in strange prayers which I myself did not understand” . . . and so on.[3] The narrator, like other boys experiencing their first crushes, can think of nothing else but to satisfy his lady’s desires, which would hopefully slake his own. Again, like other young boys, he also has a problem chatting her up, but when she approaches him about Araby, he takes up his quest.

Araby becomes the holy grail that our young knight will bring back to his lady. However, like all quests, this one is fraught with obstacles, one of which spells disaster for the would-be knight. After getting a late start after a particularly disappointing day—the “air was pitilessly raw and already my heart misgave me” when he couldn’t spy on his lady that morning—he arrives at the shoddy fair with the “magical name.”[4] The magic that he hoped to find there is replaced by the mundane and trivial. Since his uncle had forgotten about Araby, the narrator arrived late, most of the shops had already closed, and most of the hall was in darkness, reminding him less of a bristling and exotic bazaar and more of “a silence that pervades a church after a service.”[5] Images of capitalism and the quotidian soon crush his romance; English accents, flirting couples, the young lady’s lack of enthusiasm all conspire to end the quest of our knight. Romance is crushed by the paltry reality of Araby: “the light was out” for our narrator.

The narrator’s epiphany is one that is hard-learned. I would suggest that many never learn it. Indeed, how can we when romantic love is forever rammed down our throats by our culture? Can love be purchased? Won? Can anything so ideal survive reality’s mordant bite? If not, then why is romance still such a major part of our lives? By the story’s end, the narrator is no longer a knight, but a “creature driven and derided by vanity.”[5] He is not important in the scheme of things; like death, this is a difficult lesson.