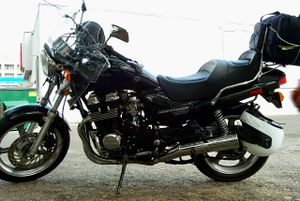 An interesting day. Well, according to Jesse, there’s a high pressure system sitting out in the Atlantic delivering a massive amount of wind and the occasional shower to the east coast. It’s expected to last though Sunday. Great. Today began well enough: I had a pleasant, sunny ride down 100 to Palatka, but as I approached north Daytona, the gray, dark, big clouds rolled in to shit on my day. Just as I made it to Daytona Beach, I got a nice bit of rain from the velvety cloak of gray crap that blanketed the whole damn sky. A nice wind has joined forces with the drizzle to make my ride, uh, wet. This on-again, off-again rainy gray lasted all day.

Well, Daytona Beach’s BMW Motorcycle dealership is nice, though no one spoke a word to me. I saw an R1150R that sang to me: it was black with a windshield and hard bags. Indeed, if someone had spoken to me, I may have traded the Nighthawk in at that moment. I believe it was a 2002; it had 3400 miles on it and called to me like a Siren. While the store was not too large, it had plenty of bikes and accoutrements to awe the casual rider. They did not have the liner for my jacket, nor did they have pants to match. This is probably a good thing, as I had no money. I spent some time drooling on the bikes, then had a quick lunch of a pear and PB&J sandwich in the parking lot before continuing south. Vero Beach was another 100 miles or so.

The rest of the day was fatiguing. South of Daytona Beach, U.S. 1 was all traffic and lights. I finally got fed up with my pathetic progress and shot over to I-95 in Titusville, after I took a picture of Kennedy Space Center from across the bay (picture to follow soon. I sold my digital camera on eBay recently, so I only had this little Kodak dispose-o-camera—thanks, A). The southward trek was quick from there. I made Vero Beach in another hour and though some rain.

Jesse and I went to have sushi. As I was traveling under an austerity program—by necessity, not choice—she was kind enough to offer her couch for the night and buy dinner. Thanks, Jes. We had a great talk about some loose ends, and decided that we'd be good friends. That was enough to make the trip worth a little gray rain. 253 miles today. About 130 more to Ft. Lauderdale tomorrow. C’mon, sun.