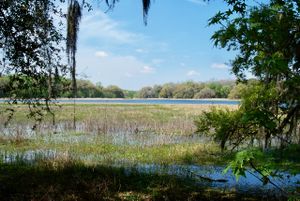 I began to notice an odd sound coming from the Nighthawk today. It sounds as if something’s grinding by my left footpeg. I hear it only in low RPMs and only when the bike is in-gear. I began using regular gasoline over spring break; maybe that has something to do with it. The chain has been well oiled, I think, so I can’t determine what the problem is. The bike seems to be running great otherwise. I hope I don’t break down in the middle of the Everglades; I keep having these recurring images of a smoking Nighthawk and a crying professor on the side of a road that no one ever uses.

Jesse took me to breakfast this morning (she usually flies in the morning, but the high winds from that high pressure system curtailed those plans) at Mrs. Mac’s Filling Station, a local favorite, I’m told. I had pig and chicken embryo, despite my intentions to be good, but the home fries were the best. If you go, get the home fries and ignore the kitsch a la the Cracker Barrel on the walls. Thanks, again, J, for the hospitality. It rained while we ate, so I was not optimistic for my day’s ride.

Despite the threat of the gray rain, the day was relatively dry. I tried U.S. 1 again, and made it as far as West Palm Beach before I escaped back to I-95. I stopped just south of Port St. Lucie to have a coffee and write a letter, then proceeded to ride through Jupiter before the traffic just got to be too much. I was hoping my friend Christian would have contacted me for a lunch around Florida Atlantic, but I still have not heard from him. He is the first no-show on this trip.

I managed to get into Dania Beach about 4:00, just south of Ft. Lauderdale. I hit major traffic—if Ft. Lauderdale were a heart and its highways arteries, it would have a daily coronary—and rain before arriving at the Wyndam. I checked in, after waiting in line in my rain gear, and got a room the furtherest from the elevator possible on the seventh floor. It was the Ballard suite, I think, as it overlooked the Ft. Lauderdale airport; Walter and I had a great view of planes landing over the concrete structures of the city. No crashes though.

Walter arrived shortly after I made my first bourbon and coke ($1.75 for a fucking Coke!?) and tried to relax with an old edition of Wired. We caught up a bit, then thought we’d call Tom to confirm our suspicions of his no-show. True to form, Tom told Walter ht it was “too far to drive.” Need I say that this conference was his idea in the first place? Sheesh. I was pissed, and continue to be. What a dickhead.

Walt and I watched TV into the small hours of the morning, an indulgence I so seldom get these days. Tomorrow morning I have to chair a panel at 9. Tired.